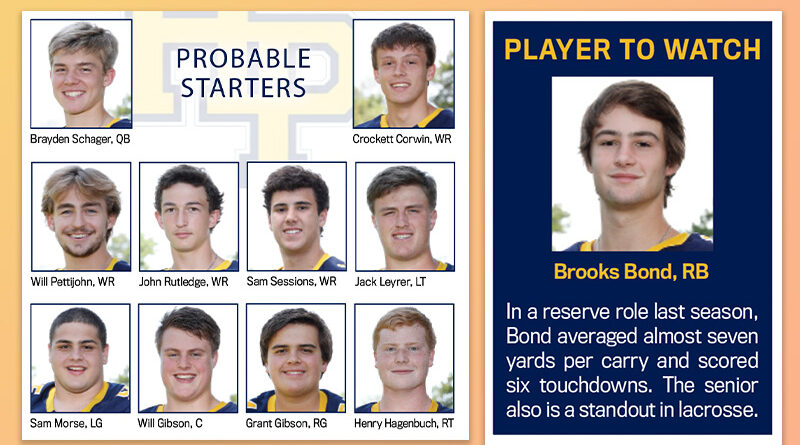 Brayden Schager knows the pressure comes with the job. He also has the skills and the confidence to meet that challenge.

The new Highland Park quarterback already has verbally committed to the University of Hawaii even before his first varsity start, which will come after one season as the backup to Chandler Morris, who’s now at Oklahoma.

“Brayden has worked so hard to be the starting quarterback. He is mentally and physically ready to compete,” said HP head coach Randy Allen. “He’s got good size and throws the ball with good velocity. He’s accurate, and he’s improved his athletic ability.”

Schager (6-foot-3, 200 pounds) will lead HP’s traditionally high-powered offensive attack, which amassed 52.6 points per game last season. And although the Scots will be inexperienced at the skill positions, their natural chemistry should prove beneficial.

“I’ve been throwing to these guys since I was little,” Schager said. “I’ve been behind some great quarterbacks. It’s great to finally be the guy.”

Returning receivers Will Pettijohn, Crockett Corwin, and John Rutledge each will assume more prominent roles this season after combining for 37 catches and six touchdowns a year ago.

The top three rushers from the 2019 squad all graduated, which leaves the starting job to Brooks Bond, who ran for a game-high 84 yards and two scores against Bryan Adams last season.

He will run behind a deep and seasoned offensive line with four returning starters — mammoth tackles Jack Leyrer and Henry Hagenbuch, guard Sam Morse, and center Will Gibson.

Check out more of the 2020 Park Cities Football Preview