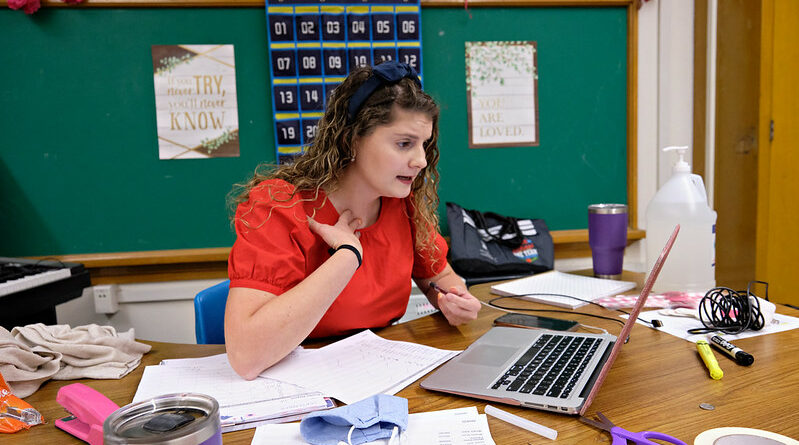 As schools began welcoming students last week – either in person for the first time or online – many also continued to watch the new cases reported by the county. Some schools are also beginning to report small outbreaks of COVID-19 as well. These are some bullet points for your Monday morning.

Dallas ISD Unlikely to Remain Online Only After Oct. 5

Although the Texas Education Agency has allowed for a total of eight weeks of remote instruction, Dallas ISD superintendent Michael Hinojosa told school board trustees last week that it was unlikely he would ask them to extend online only instruction past Oct. 5.

As we first reported two weeks ago, the district will phase-in a return, with the youngest students from each campus returning first.

But what is unknown, Hinojosa said at last week’s board briefing, is how many parents will choose in-person instruction over online, despite an ongoing survey asking parents to indicate their choice. So far only 20% of parents have answered.

If a school ends up with more than 60% of its students returning to campus, the district would need to review the space available at that school, and begin working to figure out how to keep the student population adequately spaced out. Officials could opt for a hybrid plan that would alternate on-campus instruction with distance learning, but district officials said that would be a last resort.

And, of course, all these plans hinge on a continued flattening of the curve. If numbers begin to go back up, and county health officials move the risk level from orange back to the “safer at home” red level, the district will likely need to go back to distance learning only.

“If the county goes back to red, all of these plans are off,” Hinojosa said.

A total of 580 new cases of the novel coronavirus were reported by Dallas County health officials between Friday and Sunday, and an additional 10 deaths, bringing the county’s total case count up to 75,052 including 973 confirmed deaths.

“We have indicators that show some increase in COVID-19 activity and some that are remaining flat or trending lower. The Public Health Committee is looking at these closely and will have more information when it becomes available,” said Dallas County Judge Clay Jenkins. “In the meantime, it’s very important that you continue wearing your mask, maintaining six-foot distancing, frequently washing your hands, and avoiding unnecessary trips and indoor crowds where people are not wearing their mask 100% of the time.”

The county said that the number of COVID-19 hospitalizations Friday was 325 patients. Emergency room visits for COVID-19 symptoms represented about 16% of all ER visits, according to information reported to the North Central Texas Trauma Regional Advisory Council.

UT Southwestern’s latest forecast projects that by Sept. 22, Dallas County hospitals could see concurrent hospitalizations rise to between 280 and 530 cases, with roughly 800 new cases per day on average. The new modeling does take into account the return to school campuses.

From Aug, 15-28, 317 school-aged children between 5 to 17 years of age were diagnosed with COVID-19 in Dallas County. About 50% of these cases were high school age. By zip code of residence, 167 (53%) of these children were projected to have been enrolled in Dallas ISD schools.

Close contact or community transmission continues to be the biggest risk factor for contracting COVID-19, accounting for almost 94% of all cases. Being incarcerated in federal prison, living in a long-term care facility, or being incarcerated in the county jail accounted for 1.9%, 1.9%, and 0.9%, respectively.

Ten percent of all cases ended up hospitalized – 24% ended up in intensive care, and 13% ended up on a ventilator.