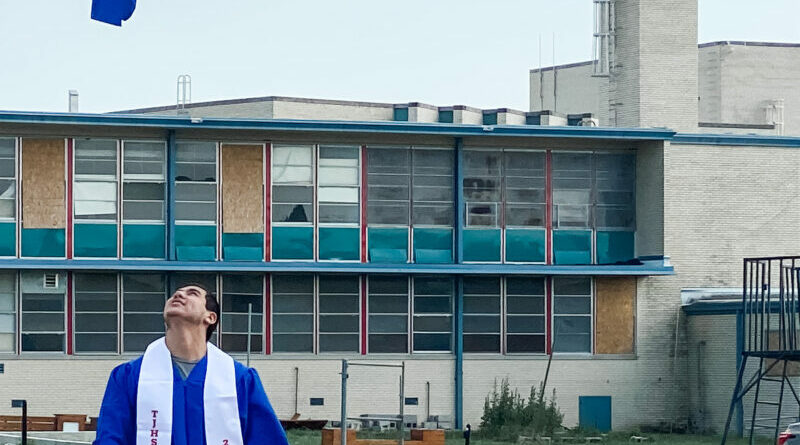 A Thomas Jefferson graduate tosses his cap in front of the tornado-ravaged school. Completion of the campus renovation project will likely now be delayed a year after the Dallas ISD school board canceled the contractor managing the project. PHOTO: Bethany Erickson
Preston Hollow Schools
August 13, 2020August 15, 2020 Bethany Erickson 0 Comments

First it was a tornado that ripped apart the Walnut Hill Elementary, Thomas Jefferson High School, and Cary Middle School campuses in October. Then a pandemic sent the kids home for the rest of the year in March.

In between those times, the district moved to an ambitious plan to demolish Cary and create a pre-kindergarten through eighth grade Walnut Hill campus, and a renovation and improvement for the damaged-but-salvageable Thomas Jefferson campus.

In January, the board approved the construction manager at risk option for overseeing the project, hiring Core Construction in that capacity.

But Thursday morning, the board voted to end the contract with Core, citing the provision in their contract that allows them to cancel it “for convenience.”

There was much back-and-forth about what led to the decision, but what wasn’t discussed was what the cancellation will mean for the construction projects.

When asked during a marathon session of board meetings and briefings Thursday, a Dallas ISD spokesperson said that Superintendent Dr. Michael Hinojosa said that he believes that the cancelation will have a significant impact on the timeline for the project.

Since the district canceled the contract “for convenience” instead of “with cause,” its not required to explain why it wants to sever the relationship with the construction company. In addition to the two North Dallas projects, the board also voted to end the contract on the West Dallas STEM school as well.

“In the CMAR method, the contractor is hired at the beginning of the project and assists the architect throughout the design phase in terms of estimating costs,” Deputy Superintendent of Operations Scott Layne explained earlier this year. “The CM will bid the project to subcontractors and manage them throughout the renovation project, similar to a general contractor.  In the traditional sealed bid process, the contractor does not come on board until the start of construction.”

So how did it come to this? The district has been fairly closed-mouthed about it, only saying that concerns Trustee Maxie Johnson brought to them were not related to the decision to cancel the contract.

But here is what we do know:

On June 29, Dominique Alexander and his Next Generation Action Network asked for the resignations of Layne and district Executive Director of Construction Services, saying that their changes to the construction process led “to failures with several projects like South Oak Cliff HS, Carter HS, WT White HS, Roosevelt HS, and now Thomas Jefferson HS.”

Layne will retire at the end of August, which was announced several months ago.

The organization said that the switch to the CMAR method versus competitive sealed bids has created the potential for unfairness and a lack of transparency.

“Trustee Maxie Johnson requested the contract for Thomas Jefferson because there have been some concerns from the community that minority contractors have been mistreated and as a School Board Trustee he wanted to ensure fairness,” the notice from NGAN said. “When Ttrustee Johnson received the contract he noticed some inconsistencies regarding the document and reached out to the African American contractor about it but was informed that he didn’t sign the contract that Core Construction Services of Texas Inc and that the President of the company Gary Frazier forged his signature on the document.”

On July 23, the board went into closed session to talk to its attorney regarding pending or contemplated litigation, “including misconduct allegations in connection with a District construction project.”

At Thursday’s called meeting, Alexander was the lone public commenter, and he asked the board to actually consider not ending the contract. He said that while there were issues, his organization has met with Core, and resolved their issues with them. His bigger concern, he said, is the students who are “packed” into Thomas Edison Middle School while they wait for Thomas Jefferson to be completed, and said canceling the contract would slow progress on the project.

Trustee Joyce Foreman, who has been an outspoken opponent of the CMAR method, said that she was voting against the cancelation.

“My problem is what happened with Core and one of its teaming partners was not the district. And it will cause harm to many African American companies that are teaming partners,” she said.

Johnson said he understood that minority businesses would be affected, but that since he was the one that uncovered the corruption, and reported it, he can’t “in good conscience” vote against the removal of Core.

Dan Micciche said that Board President Justin Henry (who was having trouble logging in) told him that he would vote to terminate the agreement if he was there. His vote didn’t count because he was not present, but he wanted the board to know.

Foreman pressed Johnson and the district staff to explain why the contracts needed to be canceled. Staff said, “for convenience,” which was not the answer she was looking for, and cautioned that anything discussed in closed session cannot be discussed in an open meeting.

“The public needs to know,” she said.

The board voted to terminate, and now they’re considering the termination of Core’s contract for the West Dallas STEM campus.

Foreman said she would like an explanation for the cancellations.

The staff said again, “for convenience,” but that’s not the answer she was looking for.

“The public needs to know.”

Johnson said the convenience reason had nothing to do with what he reported. One of the contractor’s signatures was forged, he said, and he reported that to district administration, but then stepped back to allow the administration to do their work.

Foreman was the lone vote against the cancellations of both contracts.