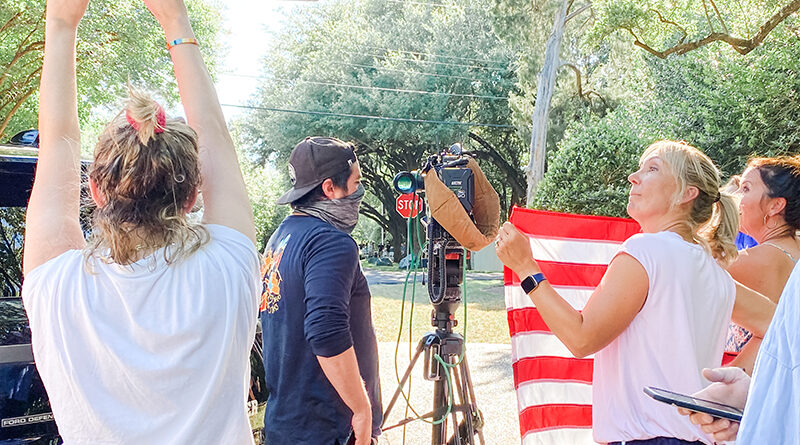 Not long after Air Force One landed in Dallas on June 11, word was out – President Donald Trump would be dining in Preston Hollow.

Guesses as to where his $580,000-per-couple fundraising dinner would occur had been flying wildly for a week – would it be in Highland Park? Would it be in Preston Hollow?

Turns out, the answer was the Preston Hollow home of Energy Transfer CEO Kelcy Warren, whose company built the Dakota Access pipeline.

Protestors, motorcade-watchers, and supporters lined Hillcrest Road. As the president’s meeting wound down to a close, news media and neighbors began to assemble outside Warren’s home on Park Lane, waiting to catch a glimpse of the motorcade – or in some cases, tell Trump what they thought of him.

A group of neighbors held a homemade sign that said “MAGA” and a large flag. They looked askance – but did not engage – their neighbor with the sign that said, “Crawl back to your bunker.”

Online, discussion about the President’s visit to Preston Hollow was just as mixed.

“Donald Trump does not represent the values of many great Republicans and many great Christians in this city, he needs to go. I applaud those that continue to turn away from him,” Shawna Brinkley said.

But another neighbor disagreed. “Your one opinion does not rule the majority. Go sit in your bunker,” Mimi Wallace said.

“Shawna, who (are) you going to vote for then? Rhetorical if you are a Republican, as you say, who will you vote for?” R.D. Taylor questioned.

“R.D. Taylor the better question is, ‘If you are a Christian, who would you vote for?’ I am assuming before being Republican or Democrat, if faith and Christianity is something important in their lives, Christian values would go first,” responded Ana Lucia De La Garza Balli.

What Do You Think? Have opinions on local and state response to COVID-19? Take it here. Have a lot to say? Send a letter to the editor to [email protected] peoplenewspapers.com.

Sons of The Flag To Host Film Festival at HP Village