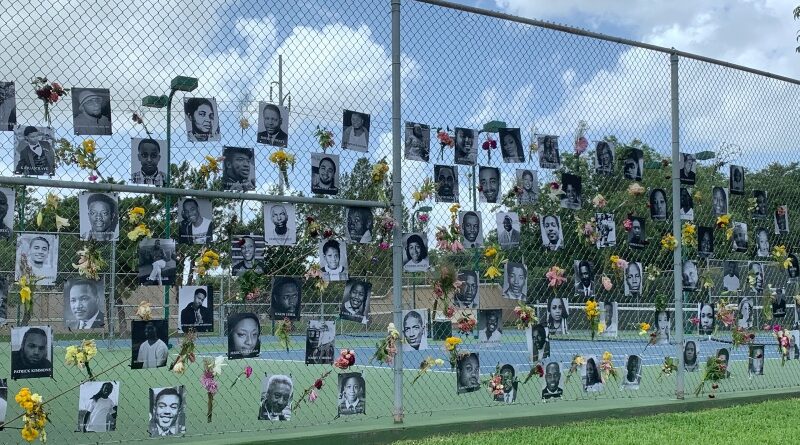 A group put together a 24-hour display Thursday on the fence of a tennis court in Germany Park to memorialize “Black lives lost to violence.”

Alicia Rico said the memorial was inspired by a similar one in Portland. She said Emily Clarke printed and laminated about 175 photos of people, including Dr. Martin Luther King Jr. and Malcolm X, who were assassinated, to be featured in the memorial display.

Emmett Till, who was lynched in 1955 in Mississippi at 14, is also memorialized in the display.

“Every photo, and there’s even more that needed to be added…but every person (whose) photo is up there was a victim of racial violence,” Rico said. “It’s not just police brutality…we’re not against police and that’s not the statement we want to make, but we just want to memorialize, really, Black lives who were lost because of racial tension and because of discrimination.”

She said floral pieces were donated to add to the memorial and a team including neighbors, Girl Scouts, and her friends in the events industry helped make bouquets and put the memorial together.

“For the community, I really wanted this to be a message of love and equality. I didn’t want this to be a political statement, but more of a human rights statement that we all deserve equal treatment and we haven’t really been on an even playing field,” Rico said. “I just wanted to kind of have a voice for our community and hope with my voice and with my actions that more people in our neighborhood and our community will start to speak out and want to have equal rights for everyone.”

She said she’s been in contact with the city of University Park Parks and Recreation Department about the display and the display is being taken down Friday.

“We do want to get..a location that will approve it in our neighborhood still,” Rico said.

For now, she said the display is moving to St. Philips School and Community Center at 1600 Pennsylvania Avenue in Dallas after Friday.