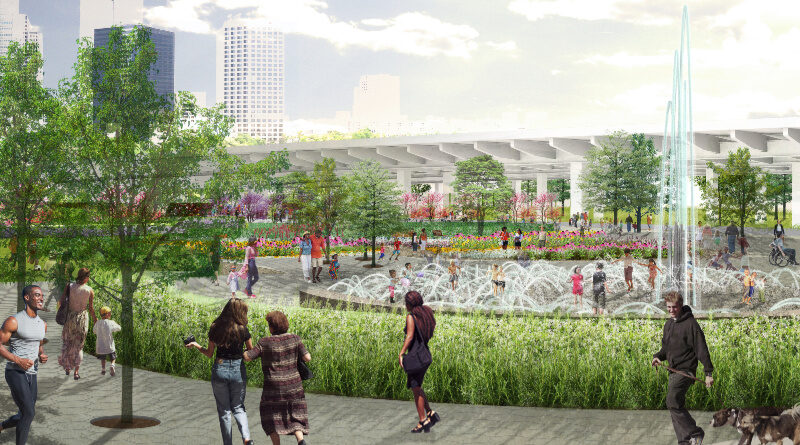 The Dallas City Council this week unanimously approved the construction contract for Carpenter Park located on the eastern edge of Downtown.

Carpenter Park is a renovation of Carpenter Plaza, a park dedicated in 1981 which has not functioned as a park since it was disrupted by roadway reconfigurations in 2011.

“The Park and Recreation Department, the Carpenter Family and Parks for Downtown Dallas have worked together for the better half of a decade to restore Carpenter Park as a community gathering place,” said Amy M. Meadows, president and CEO of Parks for Downtown Dallas. “The approval of the construction contract is a significant step towards making this park a reality for Dallas citizens and visitors alike.”

The design for the new 5.6-acre park includes a children’s environmental play, dog play, basketball court, interactive fountain, walking paths, and a pavilion to accommodate a park office and restrooms. The Carpenter Park renovation will include the planting of 122 new trees on the site for a total of 135 trees.

The new park will also showcase two pieces of sculpture. Robert Irwin’s Portal Park Slice – the second most valuable piece of public art owned by the City of Dallas – has been reimagined by the artist for the renovated park. Robert Berks’ statue of John W. Carpenter will also be reinstalled in the park.

Carpenter Park is the result of a public-private partnership between the City of Dallas Park and Recreation Department and Parks for Downtown Dallas. Additional funding has been provided by the Carpenter Family. Construction is estimated to begin in September 2020 and will take approximately 18 months.

Parks for Downtown Dallas is working to build four new urban neighborhood parks by year-end 2022, and develop a framework for maintaining and improving Downtown’s public parks.