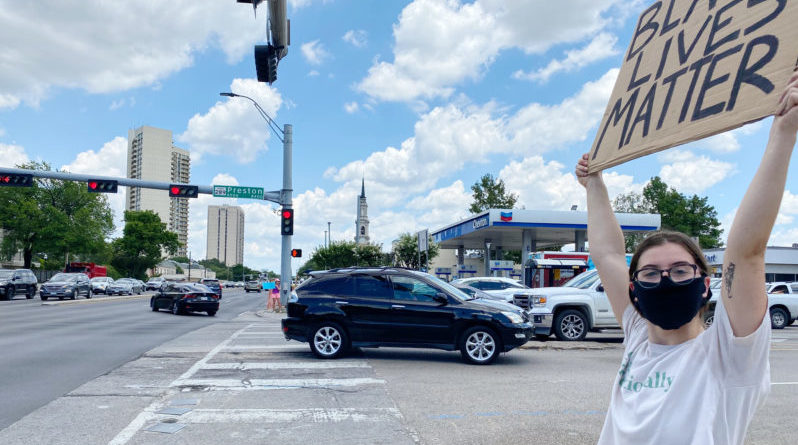 It’s been an extremely busy news week – and that fact is borne out today when the two major bullet points are the continued local response to the death of George Floyd and the biggest increase in COVID-19 cases. Here’s what you need to know today:

About a dozen or so protesters flanked the intersection of Preston Road and Northwest Highway Thursday afternoon, marking the first such protest in the Park Cities or Preston Hollow area since the death of George Floyd touched off demonstrations nationwide.

Holding signs and periodically chanting, “No justice, no peace,” the participants were greeted by a University Park police officer, who explained, “You guys know your rights, and as long as you operate within them, we’re OK.” He then further pointed out what was public property (the sidewalk) and what was private (the parking lot).

Throughout the afternoon, the participants regularly reminded each other to stay on public property. At one point, a lone woman walked up, carrying a box of water, which she left for the group. “I want to see more of this here,” she said, before walking back to her car. 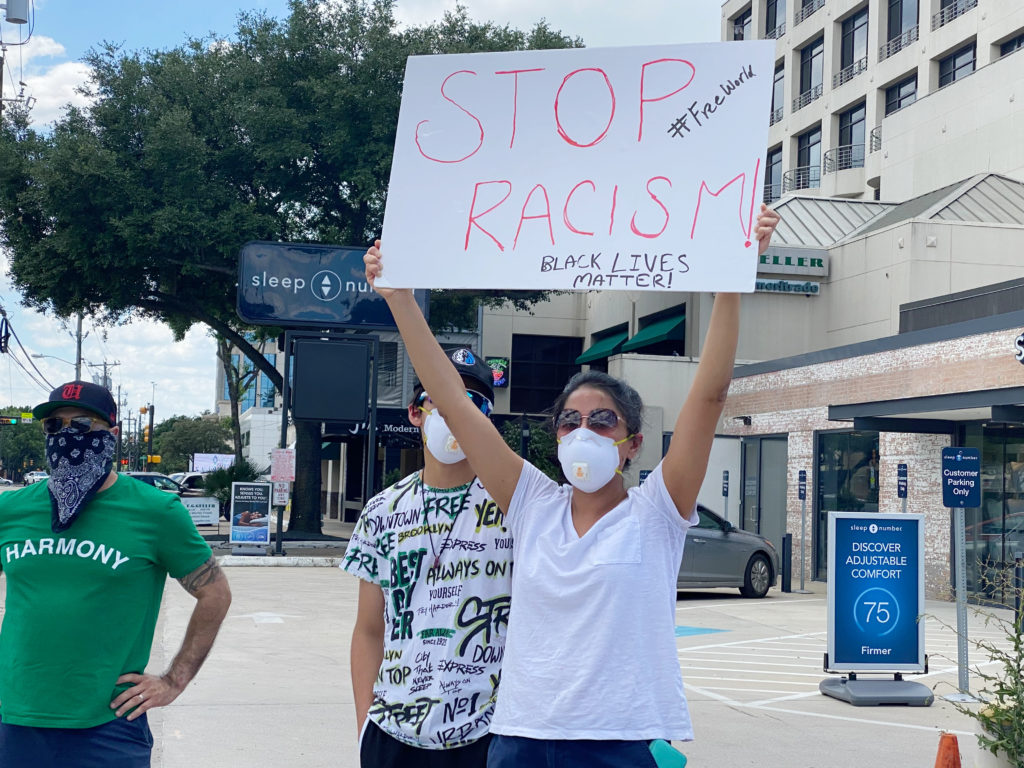 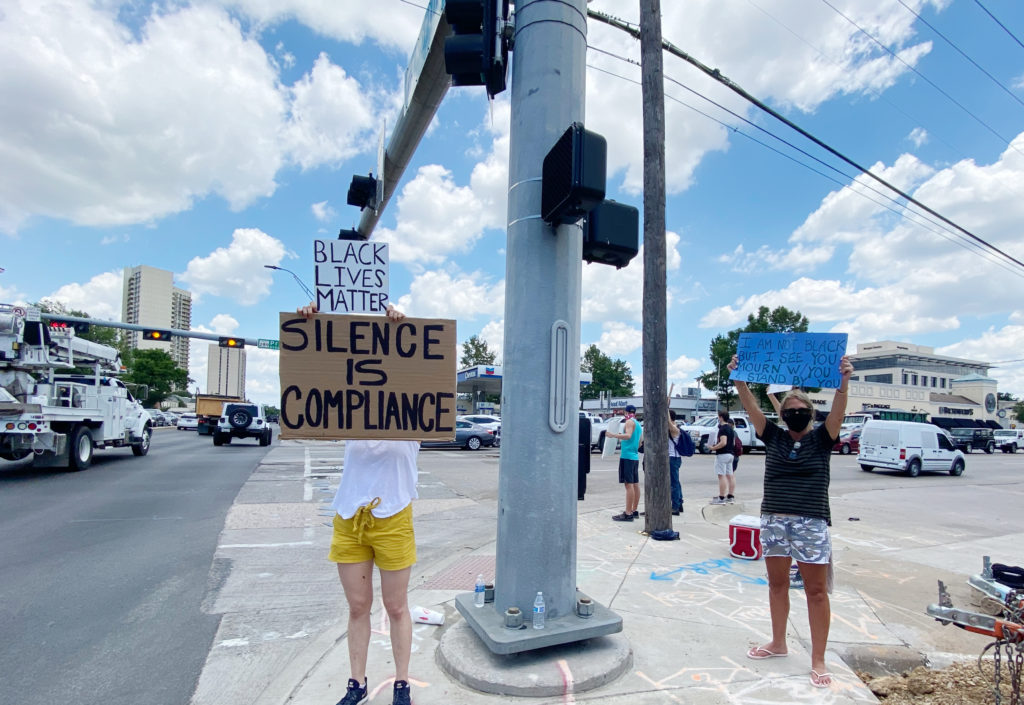 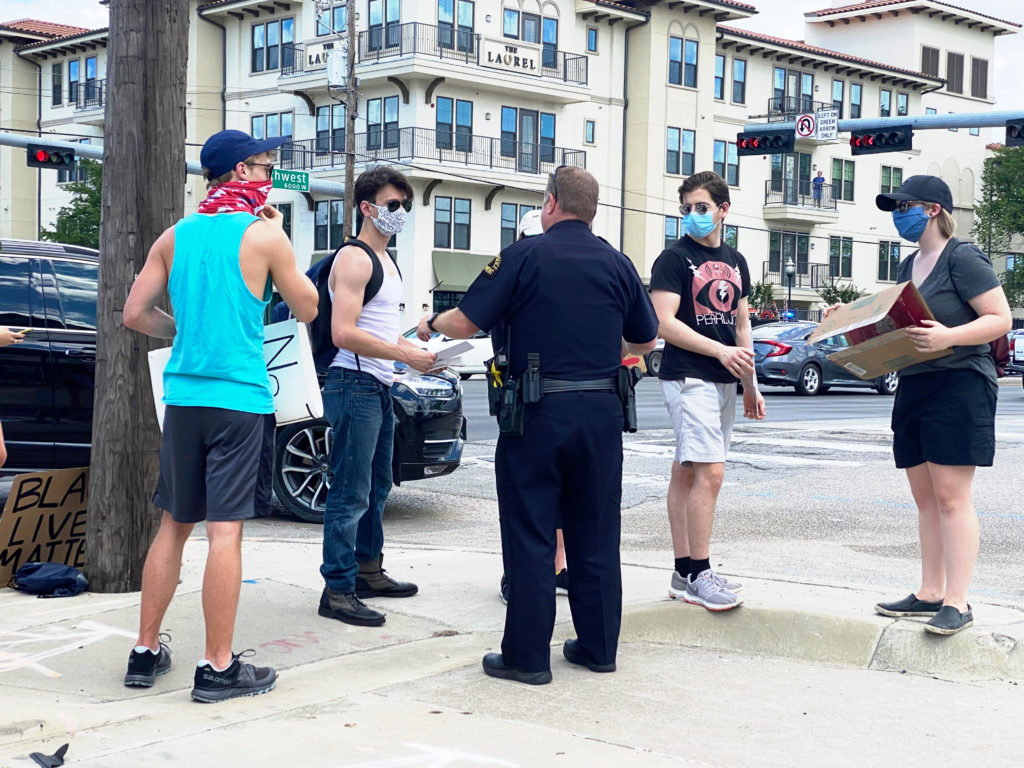 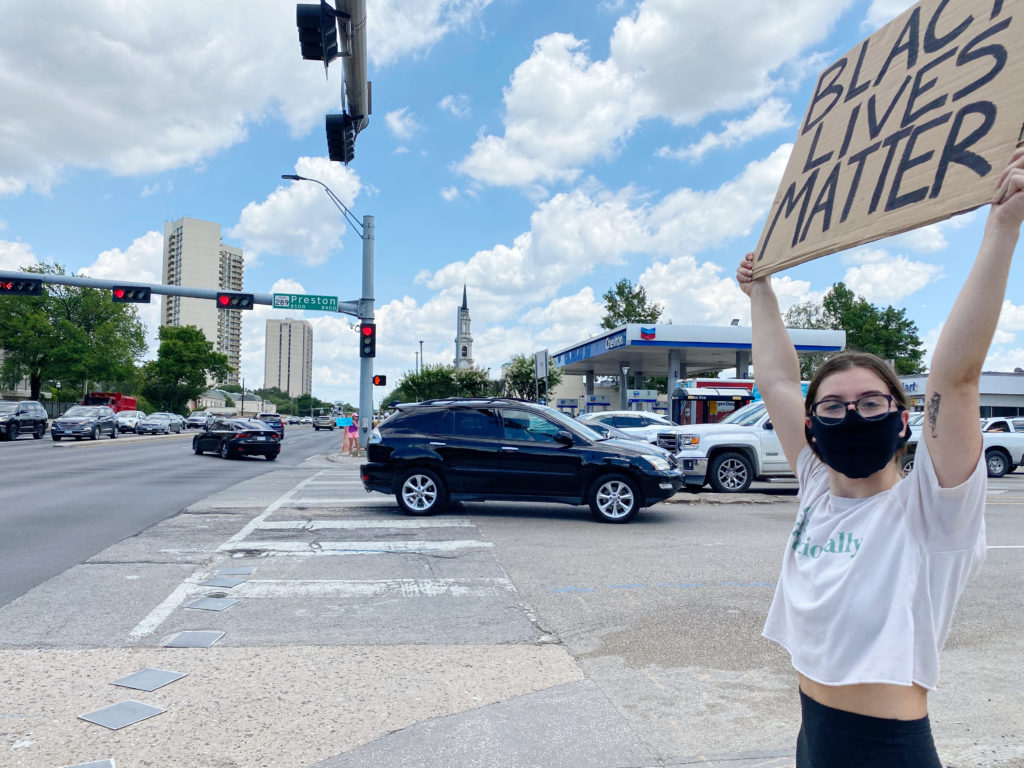 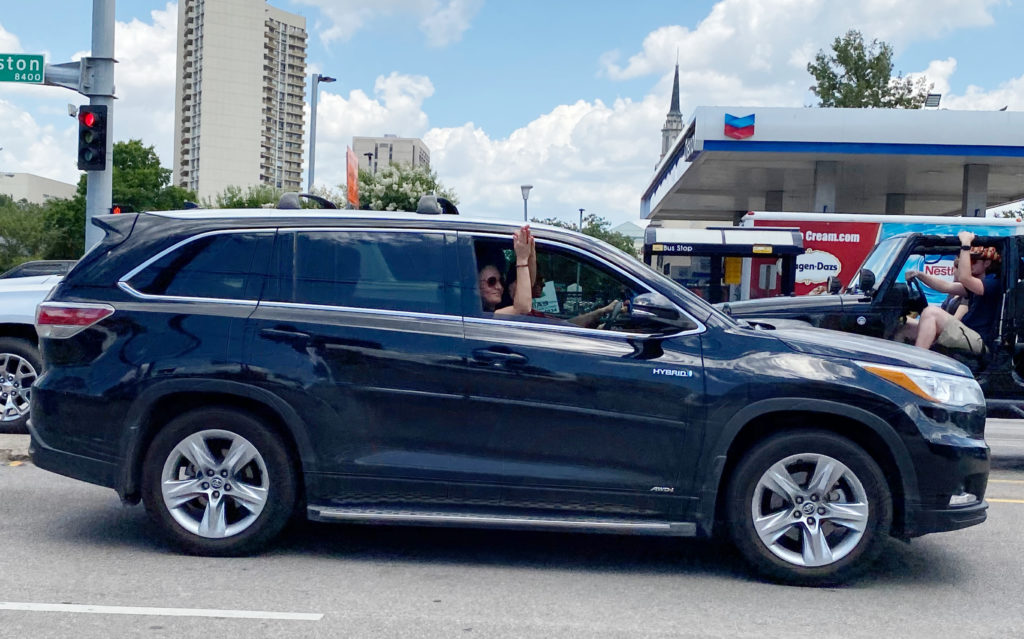 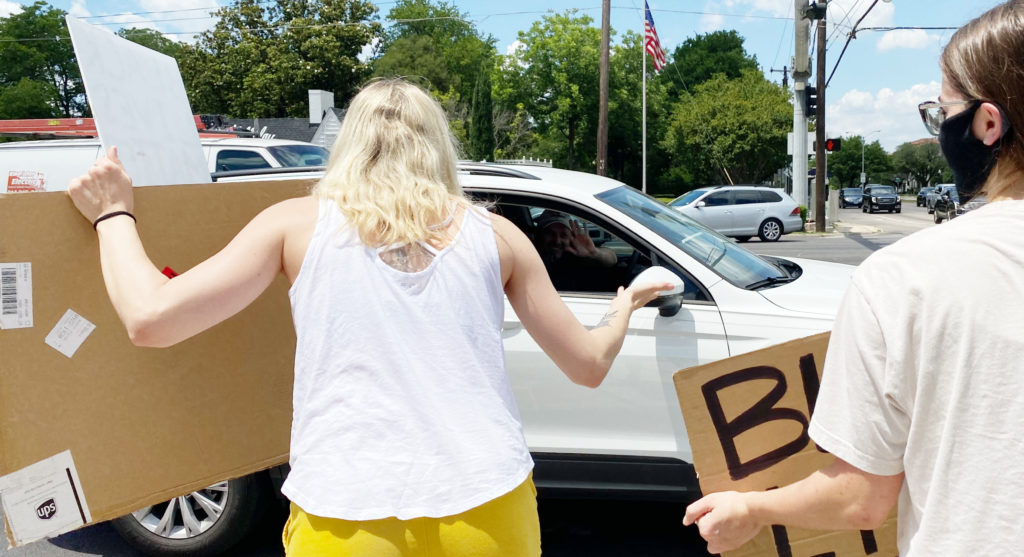 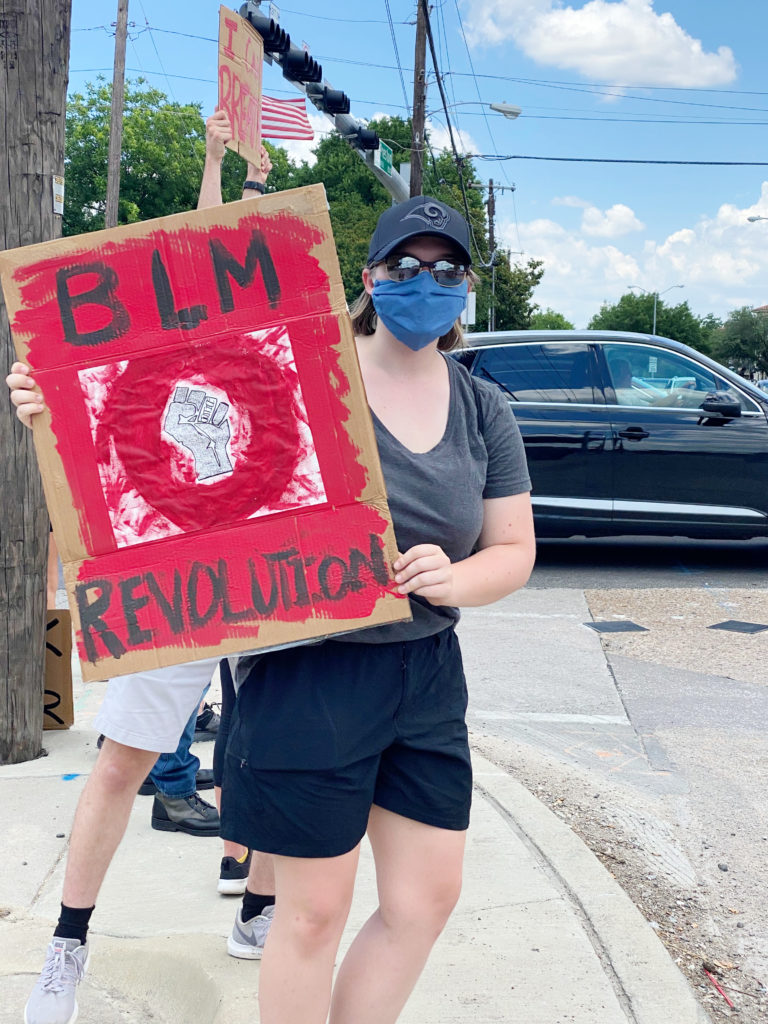 The group was greeted by honking horns, cheers, and the occasional fist pump or thumbs up. One man pulled out his phone and began to heckle them from his car while waiting at the light but, by and large, the group was met with support from motorists and passersby.

The afternoon demonstration was one of many this week that, by most accounts, seemed more peaceful.

Thursday evening, Dallas police chief Renee Hall announced that the department will not file charges at-large against the 600 protesters detained Monday night on the Margaret Hunt Hill Bridge, after consulting with City Manager T.C. Broadnax and other city leaders as well as police department leadership.]

While Hall and Broadnax said law enforcement actions that night were justified, many eyewitnesses have questioned that.

In their joint statement, both said they were encouraged by the peaceful demonstrations of the past few days. Broadnax also later informed Johnson and the rest of the City Council of a plan he hopes will help restore trust in the police force and build relationships with the community.

“Please accept our commitment to make concrete progress quickly at the city of Dallas,” said Broadnax. “Everything is on the table, and together we can move quickly to find ways that produce changes that value justice, integrity, transparency, and good governance. Hopefully, we can turn this pain and anger into action in Dallas.”

Important Things to Know Today and This Weekend

There are several events and changes that may impact your weekend plans, including: 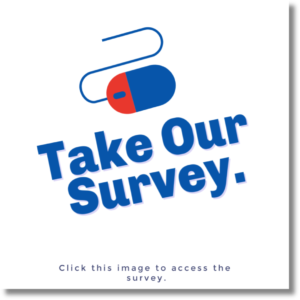 A day after Gov. Greg Abbott announced businesses could increase their capacity as the state entered Phase 3 of its reopening plan, Dallas County health officials reported 285 new positive cases of the novel coronavirus, bringing the total case count in the county to 11,243.

An additional death of a DeSoto man in his 60s with underlying health conditions brought the death toll to 250.

Of cases requiring hospitalization, two-thirds have been under 65 years of age, and about half do not have high-risk chronic health conditions. Diabetes has been an underlying high-risk health condition reported in about a third of all hospitalized patients with COVID-19. Of the 250 total deaths reported to date, over a third have been associated with long-term care facilities.

Dallas County Health and Human Services director Dr. Philip Huang said part of the increase may be attributable to an increased focus on testing nursing home residents and workers – there are 39 long-term care facilities with cases so far – but that the fact that there hasn’t been a bigger spike may indicate that many are still taking the pandemic seriously and are maintaining good social distancing practices. 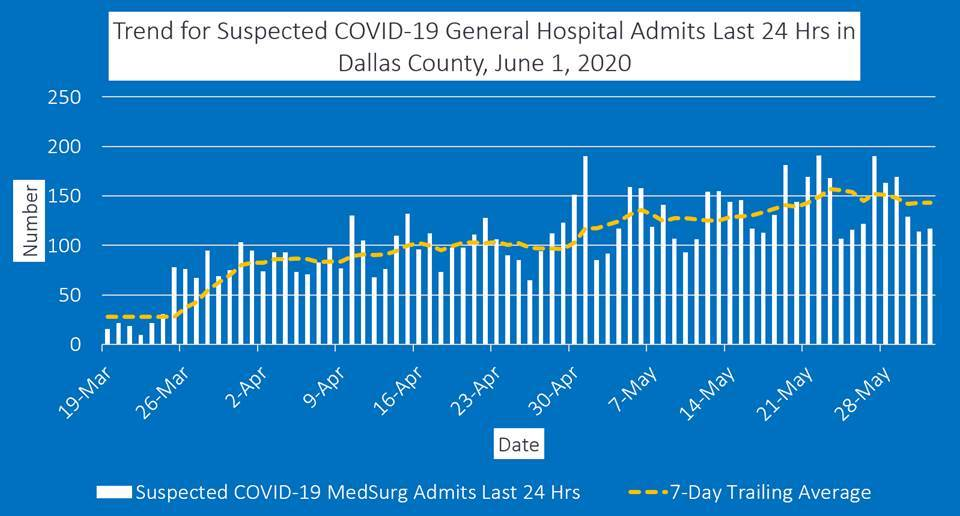 The county also said that there has been a “sustained daily census” around 300 COVID-19 patients in county hospitals over the past week, and a sustained number of people coming to emergency rooms with possible symptoms. About 22% of ER visits for a 24 hour period ending June 1 – or about 427 patients – had symptoms consistent with COVID-19. 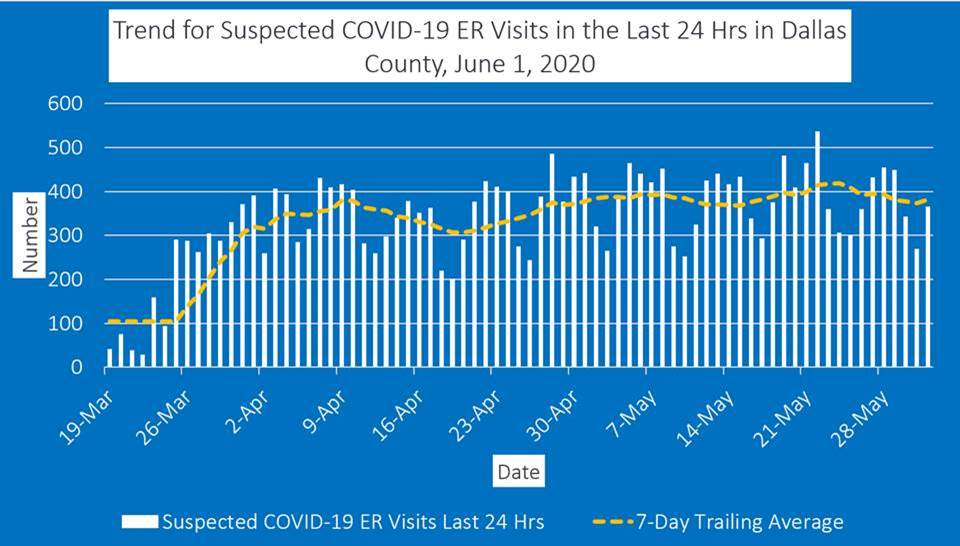 “Those numbers have been still flat, it’s plateaued, and haven’t seen a significant increase, but we haven’t seen, the 14 day decrease that we’d love to see,” Huang said.

Of cases requiring hospitalization who reported employment, about 83% have been critical infrastructure workers including those in healthcare (14%), transportation (13%), food and agriculture – which includes grocery stores and places you can buy food (16%), public works (12%), finance (5%), communications (3%), teachers, real estate, and clergy (5%), and first responders (3%).

The fact that there is a pandemic dovetailing with a time of protests isn’t lost on county public health experts, either. At a press conference Thursday afternoon, Dr. Lisa Taylor-Kennedy with the Dallas County Medical Society joined Dallas County Judge Clay Jenkins and Huang to urge those protesting to exercise caution.

“We want you to remember we are still in a COVID-19 pandemic,” she said, adding that her two children are among those protesting the death of Floyd.

Jenkins thanked the Dallas Mavericks, who made available 1,000 bottles of hand sanitizers and 1,000 masks, which his office gave to community organizers to provide to those at protests who do not have either, and encouraged protestors to maintain a 6-foot distance and use hand sanitizer frequently.

He also advocated for shedding clothing worn at protests and showering immediately upon arriving home after a protest.

“I’ve got to tell you, as a parent and just as an American, I really appreciate the spirit of these peaceful protesters, and it’s not lost on me as I’m up here talking to you about the dangers of COVID-19, the risk that a lot of them are taking,” Jenkins said during his news conference.

Jenkins also urged protestors and law enforcement officers who had been at the protests to avail themselves of the community testing sites at American Airlines Center and Ellis Davis Field House to get tested.

The county judge encouraged protesters and police officers who have been out at the protests to all get tested for the coronavirus.

Huang also said he was worried about the potential public health risks.

“It is concerning when you have hundreds or thousands of people that are in that close proximity,” he said. “Certainly many are wearing masks, it looks like, or face coverings, but not everyone, and when you have settings where a lot of people are chanting and then some droplets spread, that’s the way we know that the infection has spread. So it’s definitely concerning.”

At the press conference, Jenkins also said that the county had reached an agreement with the U.S. Department of Health and Human Services to obtain an additional 1,000 tests a day until the end of the month. They’ll be administered by Parkland Hospital.

“As Dallas County’s public health system, Parkland is continuing to target our COVID-19 outreach efforts to southern Dallas County where the need is greatest,” Michael Malaise with Parkland Health & Hospital System said in a statement. “Parkland is partnering with Dallas County Health and Human Services, the City of Dallas, and the federal government to set-up two additional walk-up testing site(s).”

The county also received $10 million to hire 260 more contact tracers to keep up with the positive cases. 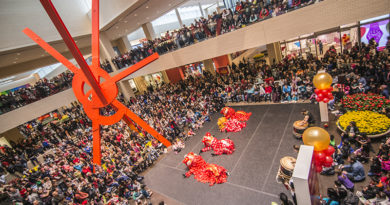 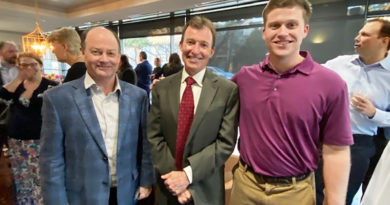 Who Was That Masked Man? Another ABC Bank Customer 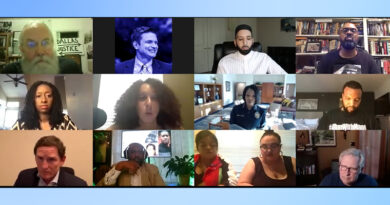