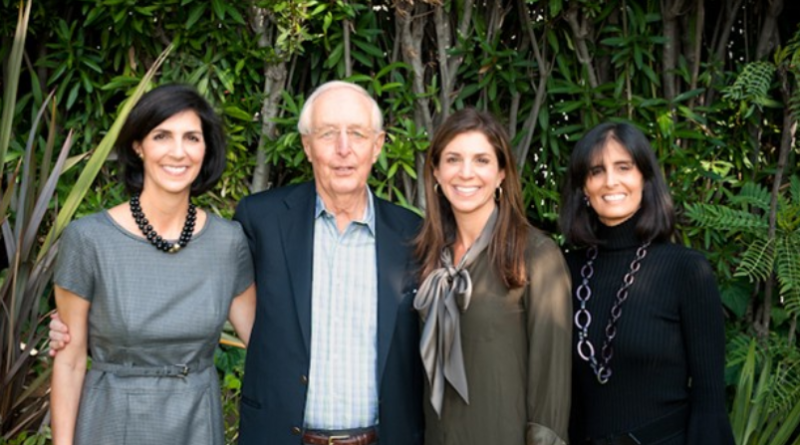 Roger Horchow, who created The Horchow Collection catalog and later became a Broadway producer, passed away Saturday at his Dallas home. He was 91.

He is also survived by five granddaughters, a son-in-law, and a brother- and sister-in-law. His wife, Carolyn, precedes him in death.

No service is planned, the family said.

“Dad wanted to be at his own memorial, and since he can’t, we thought we’d honor his wishes,” Sally Horchow told Weeks.

Horchow became the mail-order czar with his famous catalog, and from its start it attracted attention because of its departure from the format of its predecessors.

“Princess Grace ordered from the first catalog, as did men and women, young and old, Easterners, Southerners, celebrities, hostesses, art buffs. The first catalog received some 7,000 orders,” wrote Jane Wolfe in her 1985 profile of Horchow for D Magazine.

And even though the catalog was wildly successful, Horchow remained down-to-earth. Wolfe wrote in 1985 that he still drove a Chevrolet Caprice and still lived in the same home he did before starting The Horchow Collection – although he had added a swimming pool and guest house and had purchased a Nantucket home.

“It’s what you are in life that counts, not how much in material things you can show your neighbors,” he told Wolfe. “My parents told me when I was young that you can only eat three meals a day and drive one car at a time. Once you have the necessities, you have everything.”

“He and his wife don’t care for fancy, formal furnishings. Their spacious and casual North Dallas home contains works by American artists such as Milton Avery, Stuart Davis, and local artist Roger Winter, as well as 100 or so objects of folk art. The front entry is covered with Matisse’s Jazz series. Horchow is a fan of the music of the Twenties and Thirties. He loves to play, by ear, on the piano the tunes of Porter, Gershwin and Rodgers.”

It was that love that drove him to fulfill a dream of producing a Gershwin musical. He had been investing in Broadway shows for a few years when he set out to produce Crazy for You in 1992 – a Gershwin musical anchored by tunes like “Someone to Watch Over Me,” and based on George and Ira Gershwin’s original show, “Girl Crazy.”

He also supported several organizations in Dallas, becoming a benefactor to such organizations as the Dallas Museum of Art, UT Southwestern, and KERA.

The museum’s long history with Roger Horchow began in 1974, when he first joined the Board of Trustees and its Membership Committee followed by his service on the Trustee and Development Committee the following year,” the museum said in a statement. “Throughout his long relationship with the museum, Horchow served as vice president of the board for five years, chair of the marketing & development committee and as a member of the committee on collections, development committee, marketing committee, and search committee that hired Richard R. Brettell as DMA Director.”

Horchow’s support, the nonprofit said, included establishing the Richard R. Brettell Lecture Series, as well as contributions to the operations of the Mildred R. and Frederick M. Mayer Library and providing funding for the building  of the Museum’s Horchow Auditorium, the state-of-the-art theater that opened in 1993 as part of the Nancy and Jake L. Hamon Building.

“Roger was incredibly passionate, generous, and community-minded. His theatrical charm and giving personality have inspired all of us at the DMA for decades and certainly me since I joined the Museum,” said Agustín Arteaga, The Eugene McDermott Director of the Dallas Museum of Art. “While his support for our building, special exhibitions, the collections, and public programming were immense, he never lost his passion for retail, and he constantly found ways to use it in service to the museum.

“Whenever Roger said he was coming by, I knew the first place I would find him was in the DMA Store, fiddling with everything from the window dressing to the white lights, and making sure visitors could find something to buy,” Arteaga added. “His leadership and support of the DMA has played an important role in making our museum the dynamic place it is today. I am thankful I had the opportunity to know Roger and his family, including his daughters Sally, Regen, and Lizzie. We will miss his wink, his sly humor, his critical thinking, and his smile. We will mourn him.”

“Roger Horchow was a friend. A generous man with a sly sense of humor,” author Lawrence Wright said on Twitter. “When he passed away, he was waiting for a theater to open up so he could revive ‘Crazy for You,’ his Tony-winning musical. He never stopped.”

“Dallas lost a wonderful man today with the passing of Roger Horchow,” said former President George W. Bush. “Roger was a person of culture, humor, and generosity. He was important to Laura and me — and to so many fortunate friends. We send our heartfelt condolences to Roger’s daughters and grandchildren.”