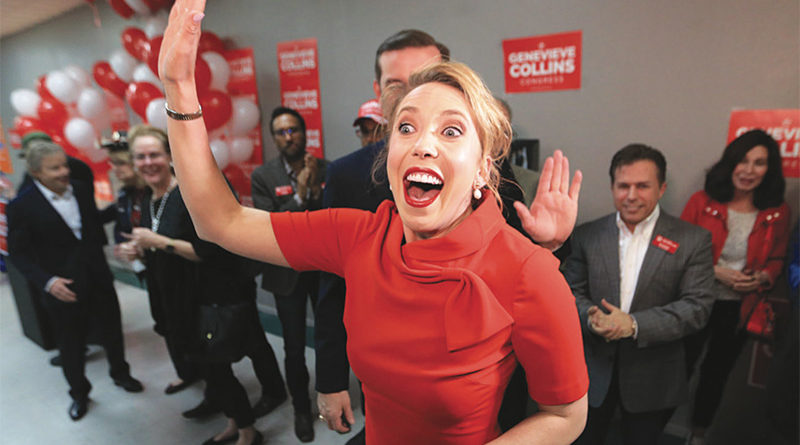 “My wife and I were at voting booths right beside each other and doing a little bit of whispering, which you are not supposed to do,” Cal Jillson confessed to the Rotary Club of Park Cities.

After working through higher-profile races, they sought to pool their limited familiarity with the seemingly endless judicial contests.

“You can figure out president, senate, house, that kind of stuff, but when you get to the judges, nobody, specifically including me, knows all those people and can make a reasonable judgment among them,” he said.

“If you have no criteria on which to make a decision, because you don’t know either one, vote for the woman. Help even things out.” -Cal Jillson

Usually, the political science professor has no need to whisper or guess about elections.

While Jillson isn’t always right – he didn’t see 2016 going the way it did – journalists frequently call to get his insight into state and national races, and Rotarians were eager to hear from him one day before Joe Biden’s big win in South Carolina.

Jillson foresaw the potential for the Feb. 29 primary to propel the former vice president into a competitive two-candidate race with Bernie Sanders on March 2, but didn’t anticipate the dramatic Super Tuesday results that moved Biden ahead of the senator from Vermont in the delegate count.

“I think most older Democrats, most institutional Democrats, would far prefer to see Biden as the nominee than to see Bernie Sanders as the nominee, but we’ll see what happens in that regard,” Jillson said.

For the 32nd Congressional District, the professor expected Genevieve Collins to emerge as the Republican nominee but didn’t realize she would do so without a runoff against Floyd McLendon.

“Her family name is on the building that my office is in at SMU,” Jillson said. James M. Collins served in the U.S. House of Representatives for eight terms.

Genevieve Collins’ Primary victory, with more than 52% of the votes in a five-candidate race, is expected to hold up even after a recount scheduled because some Dallas County ballots went uncounted.

While 2018 was a good year for Democrats with Beto O’Rourke’s U.S. Senate campaign boosting excitement, Allred’s 7-point victory “suggested that the district had evolved out from under (Republican Congressman) Pete Sessions,” Jillson said.

She gets another shot in November.

But don’t expect Democrats to get the nine seats needed to take the statehouse, Jillson said. “The fact they picked up 12 in 2018 means the low hanging fruit is already in their basket.”

But what about those judicial races?

“If you have no criteria on which to make a decision, because you don’t know either one, vote for the woman,” he said. “Help even things out.”

Summer Auditions Coming Up for TEDxSMU