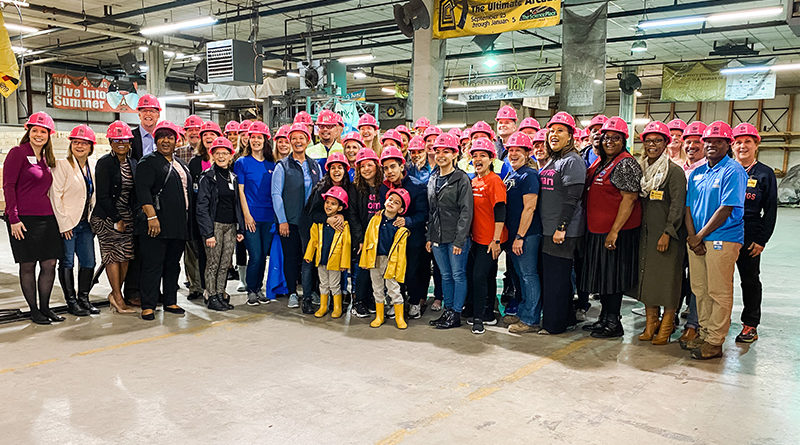 A rainy Wednesday morning prevented an on-location ribbon cutting at the build site for her new home, but Rosalinda Cortez’s smile lit up the hastily-moved event at Dallas Area Habitat For Humanity’s wall shop on North Hampton Road in early March.

The single mother of four had been waiting a long time and had put in sweat equity hours on other homes while becoming what Habitat calls “mortgage-ready” – ready to manage money and finances and be in the optimal position for homeownership.

Her home was chosen as the inaugural home in the Women Build Dallas initiative, a volunteer-led fundraiser that is – as the name indicates – powered by women.

“The goal is to build one house, repair 10 homes, and provide funding for financial education for women,” said Habitat vice president of development Carmen Holmes. “And the unique thing about this project … is this is more of an ongoing conversation about how women can support women on their journey.”

“We’re finding ways to leverage each other’s expertise and some of the skillsets people have.” -A.J. Barkley

The effort is led by 100 women from leadership and philanthropic backgrounds around Dallas, with teams formed by area women to help work on the projects. Still, other groups are helping by raising money or hosting events. Preston Hollow Presbyterian Women will host a luncheon.

Volunteers and others celebrated the beginning of Cortez’s build, knowing that in Dallas, 69% of Habitat homeowners have women heads of households, and 41% are single mothers.

Owning a home builds wealth, the organization said, and provides stability for families and communities.

“The bank itself has been extremely engaged and ingrained in Habitat across the country, so there’s a natural opportunity for me to participate because of what I do for my day job,” she said. “And it was a great marrying of me as the neighborhood lending executive for Bank of America, my personal commitment to the communities we serve, and it’s a women’s build.

“I am extremely passionate about it because we have a lot in common with this body of work,” she said. “We spend a lot of time in our company talking about diversity and inclusion, and having multiple programs supporting empowerment of women – it just made sense.”

Barkley said that the build and the rehabbing are powerful, but she’s also pleased that $1 million raised will go to financial literacy programs to prepare people for homeownership. 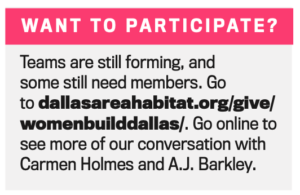 “Those three things just spoke to my spirit,” she said.

At the kickoff event, which Holmes said was attended by roughly 70 to 80 women, it became clear the effort would be a collaboration.

“They had the common goal of wanting to collaborate,” Barkley said. “We were building teams while we were in the room.

“We’re finding ways to leverage each other’s expertise and some of the skillsets people have.”