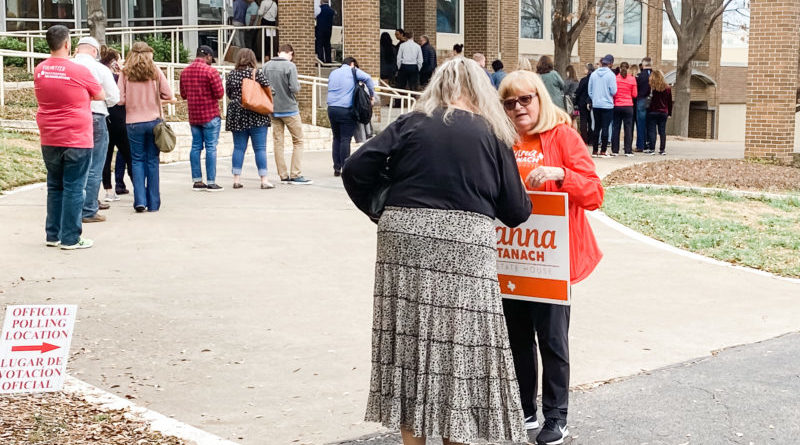 Dallas County didn’t count votes from 44 scanning machines, and now it is seeking a recount of the March 3 primary results.

Dallas County election administrator Toni Pippins-Poole filed the petition in state district court late Friday, saying that her office found that ballots from 44 tabulating machines were not accounted for when her office found it couldn’t reconcile the number of voters who checked in to vote at some polling locations with the number of ballots received.

“However, it was later determined that there are ballots from 44 of the precinct scanner and tabulator machines that are unaccounted for.”

The new voting machines require two thumb drives to record the votes – a primary and a backup. The votes are tabulated and recorded on the primary thumb drive, and then when the machine is closed at the end of the voting day, the information on the primary drive copies to the backup.

Election judges then take them to one of 13 regional sites, and election officials reconcile the number of voters at each voter center to the number of ballots cast.

It was during that reconciliation that officials found that 44 primary thumb drives were missing — 16 were not received in a “timely manner, and 28 were from voting machines that were not slated for use on March 3 but were used by volunteer election workers.

It’s not clear which polling places were impacted.

There were at least one machine at each of the 454 polling places. Some locations had two of the machines, which received the marked backup paper ballots from the voter so they could be scanned and tabulated.

The newer equipment used in the primaries allows voters to fill out their ballots electronically, and then print out a backup paper ballot.

“This new election equipment records citizen votes electronically, but also creates a paper ballot record of the votes which were cast,” according to the court petition, which asks the court to allow it to recount those paper ballots.

Dallas County Commissioner J.J. Koch, whose District 2 encompasses much of the Park Cities and Preston Hollow, said that county officials knew of the issue by Friday night, but had hoped to circle back on Monday to discuss how best to address it. However, reporting by the Texas Tribune brought the matter to light Saturday afternoon, and local media soon began reporting on it, too.

“There wasn’t an opportunity to wait until Monday with this,” he said.

A weary Koch said he had been fielding calls from reporters all afternoon, and expressed disbelief that the error had taken place.

“I can’t believe we’re talking about this, but then again I can,” he said. “And it’s so disappointing.”

On Twitter, Koch had adamantly stated that Pippins-Poole should resign immediately. The commissioner is known to not be her biggest fan, going so far as to sue to have her removed from office in 2018.

“You know, I can see how that can hurt my ability to fix this,” he acknowledged. “But I sat down with her after all of that at Commissioner Price’s suggestion. We talked. We have kept it cordial.

“I have really worked hard to work with her – I want to make things work.”

“Voters have a constitutional right to have their votes counted – this is not a speculative venture, this is something we have to do.” – J.J. Koch

Koch said that he believes that the most recent issue is an example of a systemic problem within Pippins-Poole’s management, adding that it even crops up at the commissioner’s court meetings, when she is often late filing her items for the agenda.

“I really think that always being behind the 8 ball is creating an emergency,” he said, adding that he doesn’t believe she’s intentionally creating issues. “Everything is constantly a crisis,” Koch said. “If you gave yourself more time, and were more deliberate, had better risk mitigation, outcomes might be different.”

With the rollout of the voting centers and the new machines, Koch said he felt the county simply bit off more than it could quickly chew.

“We were trying to do too much too fast,” he said, adding that he agreed with the concept of voting centers, but would’ve preferred a timeline that allowed for more training time and implementation time.

“Throughout the entire process before the election, there were instances of mistakes being made, simply because we didn’t have the bandwidth to handle this,” he said “I made it clear that I thought we were really going to have a problem.”

Koch stressed that he felt the issues were not with elections employees – “we have great employees” – but stemmed from poor planning on the part of leadership.

“Even at the commissioner’s court, there was this reaction of, ‘Oh, Toni’s done it before, it’ll be fine,’” he said.

Koch said that he knows for many, Pippins-Poole’s tenure as elections administrator is seen as a Democrat versus Republican issue, but he says it boils down more to job performance.

“That doesn’t change that she’s made consistent mistakes over the years,” he said. “You have to admit when you failed – it’s how you improve. Instead, we repeat the same problems.”

“It’s the learning-feedback loop,” he added. “‘I haven’t done anything wrong’ is the reaction, and because of that, there’s never really a course correction.”

Although there will be a municipal election in May that could give the county another opportunity to test drive its processes, Koch said it’s really not a dress rehearsal because the November election will be so much bigger in size and scope – something that worries him.

“I don’t think it will get fixed,” he said. “We need someone to step in and really dramatically change the direction of the ship.”

“Voters have a constitutional right to have their votes counted – this is not a speculative venture, this is something we have to do,” he added.