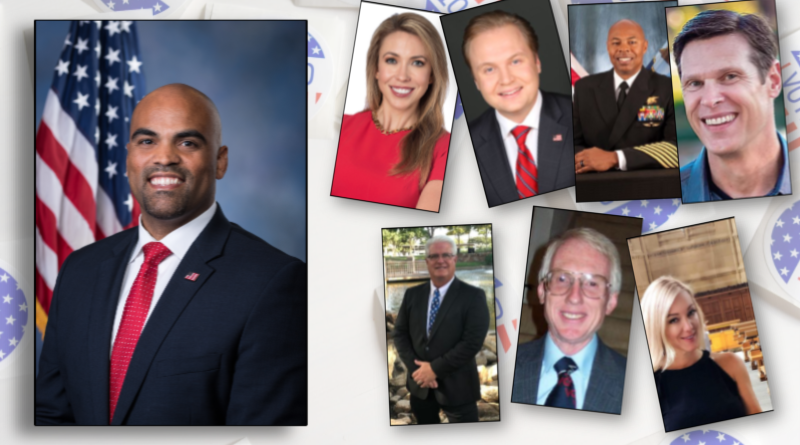 By the end of Super Tuesday (or, probably more accurately, by the wee hours of Very Tired Wednesday), Democratic Congressman Colin Allred could know for certain who his Republican and Libertarian challengers will be for the House District 32.

Collins, who has raised more than $910,000 in just five months since entering the race, and McLendon, a relative newcomer to the district, are seen to be the frontrunners in the GOP primary.

Collins has a master’s degree in business, and is the head of corporate strategy at Istation, an education technology firm. She has picked up endorsements from the Dallas Morning News and Rep. Lance Gooden, and still has $787,000 in the bank, according to her most recent campaign filings. McLendon served 25 years in the Navy, with 13 of those as a Navy SEAL, before becoming an assistant to Texas Attorney General Ken Paxton. He has raised $617,000 so far, and has $115,000 in the bank as of his last campaign filing. He has been endorsed by the Republican Main Street Partnership and Patriot Texas.

Sackett is an engineer, with degrees in civil and industrial engineering from Texas A&M, and has been with Hilti Inc., for 31 years.  Hollis has worked in TV and film production, according to his bio, and was fired from his last job for his conservative stances, he said. He moved to Uptown in November, after first fundraising in California to run against Rep. Adam Schiff. He filed paperwork with the Federal Election Commission in November stating he was a Republican candidate in the Texas 32nd. He raised money in California’s 28th Congressional District for four months before the switch.

Tokar, who served as a firefighter for 34 years before retiring from the Garland Fire Department in 2013, holds degrees in theology and executive fire service leadership.

The battle between Collins and McLendon has gotten a bit heated at times, with a recent dustup over campaign mailers by McLendon. Collins’ campaign called McLendon’s mailers, which stated that Collins had refused to take a definitive stance on abortion and second amendment rights, “desperate,” and gave McLendon the nicknames “Flailin’ Floyd,” and “carpetbagging Floyd.”

“While we’ve kept our campaign positive every step of the way, it’s disappointing to see Floyd McLendon’s desperate campaign lying about Genevieve and her record. Genevieve received an AQ rating from the NRA, the highest possible grade based on their questionnaire, while Floyd McLendon received a ‘?’ for not sending his back,” said campaign manager Rob Costello.

The McLendon camp insists that Collins “has refused to answer any tough questions about life or Second Amendment rights,” with McLendon consultant Eric Bearse chafing against the “carpetbagging” claim, telling the Dallas Morning News that Collins had been deceptive about her residency.

Collins said she had lived a few hundred yards outside her district until she moved in November 2019, but had lived in Dallas her entire life, except for a period of time when she attended college in Tennessee.

Allred bested longtime incumbent Pete Sessions in 2018, flipping the district from solidly red to a bit more purple, winning 52.3% to Sessions’s 45.8%. Allred, who is unopposed in the Democratic primary, is thought to be one of the Democratic Party’s more vulnerable lawmakers – in fact, he’s one of 42 in a Democratic Congressional Committee program for vulnerable incumbents. The District 32 seat will likely be a battleground election, with FiveThirtyEight‘s September 2018 elasticity score, which looks at how sensitive a district is to changes, gave the District 32 a 1.02, meaning that for every one point the national political needle moves in one party’s direction, the district was expected to move 1.02 points that direction.

The Cook Political Report rated the race as likely to lean Democratic in its most recent ranking, as did Inside Elections.

Follow along with us tomorrow as we provide continuous coverage of Super Tuesday.

One thought on “Seven Line Up for Chance to Challenge Allred”