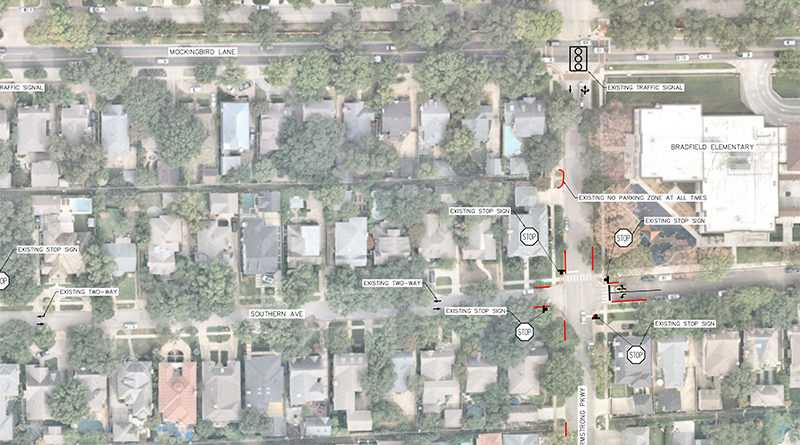 Editor’s note: After the March issue of Park Cities People went to press, Highland Park leaders decided to have a new one-way zone for the 4400 block of Southern Avenue only apply from 7:15 a.m. to 4:30 p.m. on school days.

Bradfield Elementary parents, spring break could bring some lasting relief from the traffic turmoil faced while dropping off and picking up your children.

Highland Park town officials plan to use the March 16 to 20 break from classes to paint curbs and install the signs needed to expand no parking zones, prohibit some right turns, and make more of Southern Avenue one-way.

They expect the changes to improve safety for students and ease frustration for motorists when school resumes on March 23.

“We feel confident this is going to make a huge difference,” said Lori Chapin, director of engineering.

After 13 months of demolition and reconstruction, the school reopened in the fall on its 93-year-old campus at 4300 Southern Avenue. The rebuild modernized the school and reconfigured the campus, locating its buildings closer to Armstrong Parkway than before.

“One of the things you’ve got to do is move the traffic away. We are moving this both north and west.” -Lori Chapin 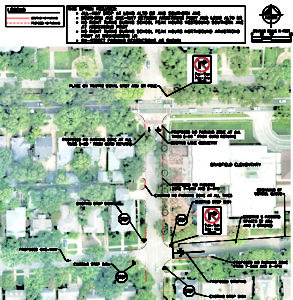 “It’s been such a mess over there,” Mayor Margo Goodwin said.

To address the situation, town staff worked with consultant Kimley-Horn and Associates Inc. and secured support from school leaders, including the president of the PTA.

“If they are not on board, nobody’s on board,” Goodwin said.

For that reason, the plan is to prohibit right turns at those locations between 7 and 9 a.m. and 2 and 4 p.m. weekdays.

Southern Avenue, heading west, is already one-way adjacent to the school, and town leaders want to extend that west through the 4400 block to Lomo Alto Drive, from 7:15 a.m. to 4:30 p.m. school days.

Mayor Pro Tem John McKnight observed, “It looks like we are just pushing the problem down to Southern and Alto Loma.”

Chapin explained that spreading out traffic is the goal.

“One of the things you’ve got to do is move the traffic away,” she said. “We are moving this both north and west.”

Parking within 20-feet of intersections is already prohibited. The town plans to make that more clear while also adding temporary zones on Armstrong and Southern near the school prohibiting parking between 7 and 9 a.m. and 2 and 4 p.m.

“I think the no parking zones might look a little restrictive, but it’s to keep the students safe,” Goodwin said. “I assume the police department will be extra vigilant.”