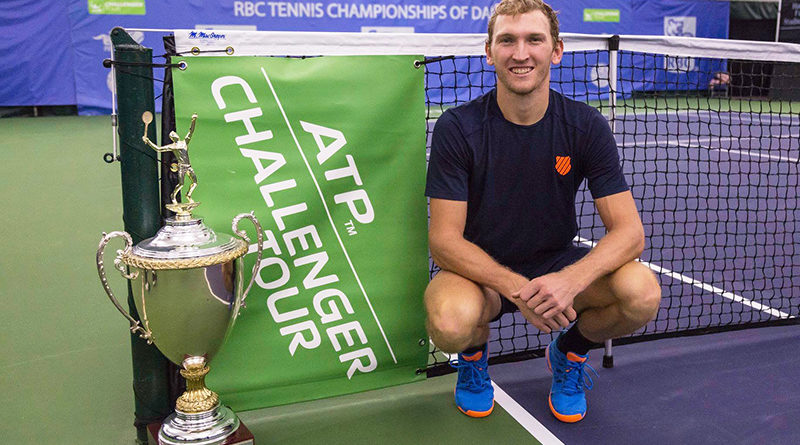 Mitchell Krueger’s praise of the RBC Tennis Championships of Dallas has little to do with the fact that he’s the defending champion or lives only a few miles from the venue.

Krueger said other factors have contributed to the longevity and reputation of the annual indoor stop on the ATP Challenger Tour event that has lured some of the top men’s players in the world for more than two decades.

“I’ve always been biased, obviously growing up here, but I’ve told a lot of people that it’s one of the best Challengers out there, especially in terms of the atmosphere and the support,” said Krueger, who grew up in Fort Worth and now lives in Dallas. “I think everyone tends to agree with me. It makes playing here a lot more fun for the players.”

“Challenger tennis is a lot higher level than I think some people realize.” -Mitchell Krueger

Krueger won the singles draw last year and will return to defend his title on Feb. 3-9 at T Bar M Racquet Club. The same event included doubles appearances from standouts John Isner and Nick Kyrgios. Two years ago, the singles champion was Japanese star Kei Nishikori, who later advanced to the semifinals at the U.S. Open.

The Challenger tournaments typically attract a mix of up-and-coming players trying to break through on the ATP main tour, and established pros looking for a tuneup during a break in the schedule. This year’s field will include American standouts Jack Sock and Steve Johnson.

“Challenger tennis is a lot higher level than I think some people realize,” Krueger said. “It’s definitely cool for someone who maybe only watches on TV to see the speed of the ball and the speed of the serves and returns, and all of the little nuances.”

The Dallas event, which has been held at T Bar M since 1998, also partners with several charities. Beneficiaries of the 2020 tournament include Susan G. Komen Dallas County, the Maureen Connolly Brinker Tennis Foundation, and the Isner Family Foundation. Isner, who lives in the Park Cities, will hold a private clinic as part of the festivities.

“There’s a good buzz in the tennis community about our tournament,” said T Bar M owner Glen Agritelley. “We continue to try and raise the bar and make it better and better every year.”