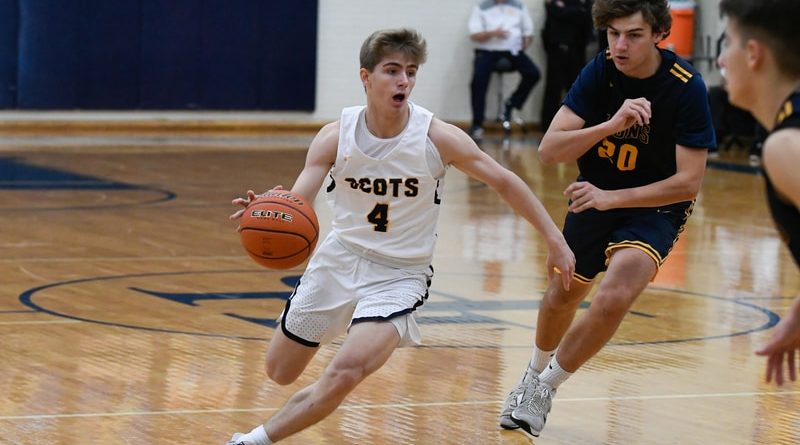 As Highland Park faced its toughest test of the season, St. Mark’s again showed why it’s been going head-to-head with some of the area’s top public school teams.

The Lions overwhelmed the Scots in the first half and cruised to a 70-52 win on Friday to remain unbeaten against in-state opponents this year.

Four players scored in double figures for St. Mark’s, which took a 37-17 halftime lead and never looked back. Andrew Laczkowski led the way with 19 points, followed by Harrison Ingram with 17 (part of a triple-double) and Colin Smith with 15.

The Lions (8-1) have started strong this season despite playing just one home game. St. Mark’s recently finished renovating its secondary gym to provide a temporary home this season after the school’s main gym was destroyed by an October tornado.

Meanwhile, the Scots (4-3) were paced by Jack Pease with 13 points and Jacob Hager with 12. In its first game since adding football players Drew Scott and Prince Dorbah to the roster, HP outscored St. Mark’s 35-33 in the second half.

After opening the season with a seven-game homestand, the Scots will hit the road for the first time on Tuesday against upstart Grand Prairie, then will head to the Union Square Bulldog Classic tournament next weekend in Burkburnett.

The only defeat for the Lions came against California powerhouse Prolific Prep in the Thanksgiving Hoopfest event. Two days earlier, they won the Mavs Fall Classic tournament, where Ingram was named the MVP.

Next up, St. Mark’s will host Anglican Church Grammar School from Australia on Wednesday, then will travel to face perennial power DeSoto on Dec. 13.

Lady Scots Getting Ready for District