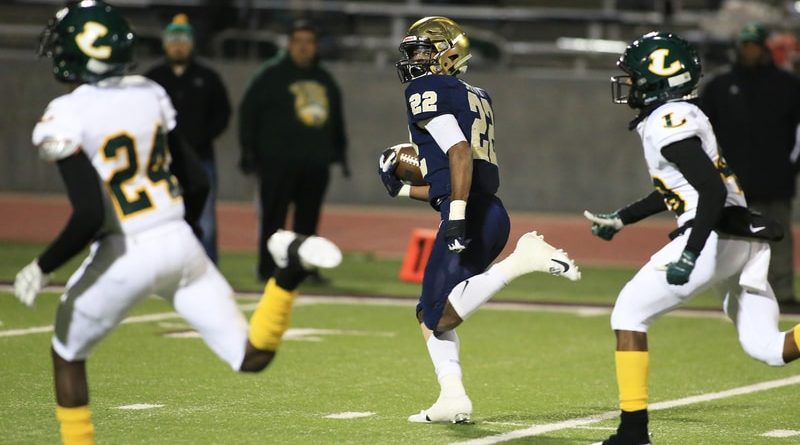 Jesuit is riding the legs of E.J. Smith into unprecedented postseason territory.

The Rangers have reached the Class 6A Division II Region II final for the first time, and will meet perennial power Spring Westfield on Saturday at NRG Stadium in Houston.

Smith has scored 11 touchdowns in three playoff games, including four during a 28-21 victory over Klein Collins on Nov. 30 in Waco in the regional semifinals.

The postseason run has been remarkable in part because Smith, son of Pro Football Hall of Fame running back Emmitt Smith, had surgery for a broken hand less than three weeks ago. Plus, Jesuit didn’t even make the playoffs last year for the first time since 2009.

Apparently, Smith’s injury hasn’t affected him. He also scored four times on the ground during an upset of defending state champion Longview in the area round.

In the game against Collins, he caught a 95-yard touchdown pass from Rance Holman and ran for three more scores. Smith’s 8-yard scamper with 58 seconds left broke a 21-21 tie and sent the Rangers’ sideline into jubilation.

Others played key roles for Jesuit in the closing minutes of the third-round victory. Christian Allocco put the Rangers (9-4) in scoring position with a 37-yard reception on a screen pass. Later, Robert Fitzgerald intercepted a pass in the final minute to seal the game.

Now, Jesuit will look to secure its first 10-win season since 2015 and earn a state semifinal berth against either Denton Guyer or Amarillo Tascosa.

On the other side, the Mustangs (12-1) extended their winning streak to 10 games with a 38-7 drubbing of Waco Midway last week. Westfield lost in the same round last year to Longview.