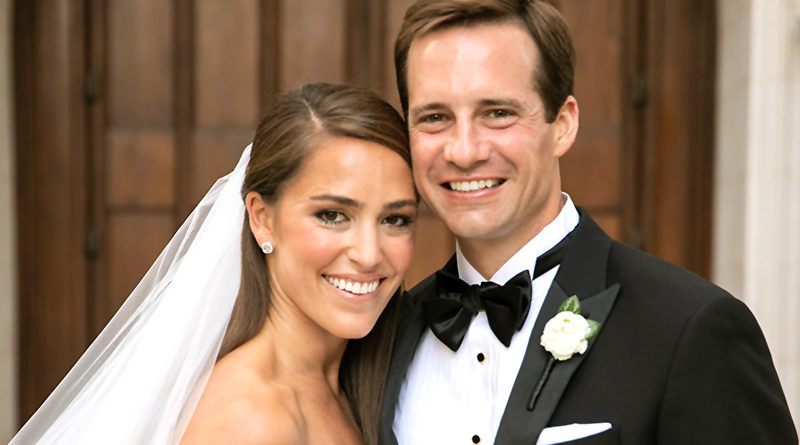 The Wedding Weekend began with the Rehearsal Dinner at The Mansion on Turtle Creek hosted by the groom’s parents. The special evening started with a private cocktail party in the Mansion Bar. The Veranda glowed with the beauty of the candle-lit room filled with all white flowers accented with touches of blue and silver. The seated-dinner was followed by an after-party featuring the Ray Johnston Band.

The bride was escorted down the aisle on the arm of her father and presented in marriage by her parents. For her wedding dress, Lauren wore an elegant, one-of-a-kind couture gown designed by Nardos. The fitted, silk faille strapless gown had French lace appliqués beaded with crystals and a sweeping cathedral length train. Covered buttons down the back of the dress accentuated the timeless look. Her ethereal veil gracefully extended past the edges of her train and featured the same lace scattered along the trim. A piece of lace from her mother’s wedding dress was sewn into her gown with her married monogram adorned in blue – representing Lauren’s something old and something blue. Lauren carried a white silk hand-tied bouquet of orchids, roses, and hydrangeas.

A reception followed the ceremony at Brook Hollow Golf Club. The evening began with a garden-inspired cocktail party in the Oak Room. Cascading blush and white roses and hydrangeas surrounded the passageways welcoming guests into the ballroom. The bride and groom stepped onto the monogrammed dance floor for the first dance of the evening to “This Will Be” by Natalie Cole. A room off the ballroom was transformed into the Polo Lounge at the Beverly Hills Hotel, paying tribute to one of the bride’s favorite destinations. Known as the Pink Palace, the bride incorporated the color pink and the hotel’s iconic Martinique banana leaf print into the decorations of the bar. The bride’s cake was a stunning seven-layer cake with a delicate design adorned with fresh white flowers, while the groom’s cake was a replica of The University of Alabama’s Bryant-Denny Stadium; it even had the fight song around the edge! The reception included food stations from the bride and groom’s favorite restaurants. The evening ended with the newlyweds departing from Brook Hollow with sparklers and driving off in a white 1954 Ford Convertible.

The bride is a graduate of Highland Park High School. She received a Bachelor of Science degree in Human Relations from the Moody College of Communication at The University of Texas at Austin. Lauren was a member of Pi Beta Phi sorority, where she served as Pledge Class President and Pledge Trainer. She is a client service associate for Wealth Partners Alliance, which is affiliated with Raymond James Financial Services.

Upon their return from a honeymoon in France, which paid tribute to the bride’s heritage and where the groom’s parents honeymooned, the couple has made Dallas their home.