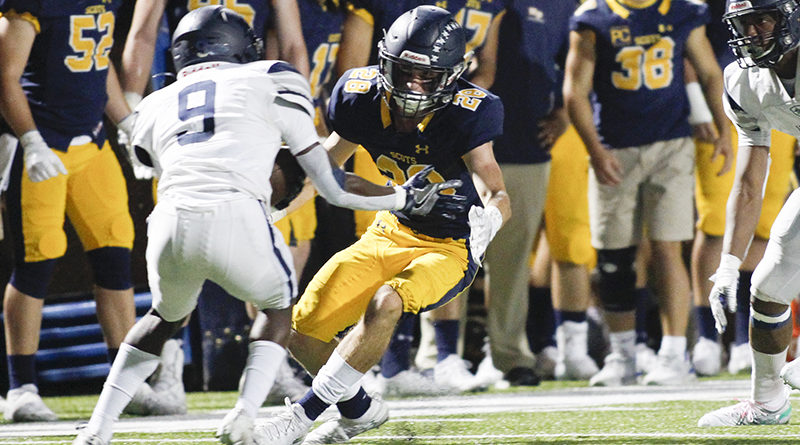 Why putt a golf ball into a hole when you can dunk a football in a trash can?

As a starting cornerback for Highland Park, Ford Frazar would prefer to do the latter — a sideline ritual symbolizing each takeaway by the defending Class 5A Division state champions.

The classic metal receptacle has been a fixture on HP’s sideline for the past couple of seasons as a motivational mechanism for its opportunistic defense. As a junior, Frazar hasn’t gotten to take temporary ownership of the can — he’ll have to wait a year for that — but he’s still eligible to slam the customized blue-and-gold ball after forcing a turnover.

Frazar has emerged as a key component of a relatively young secondary this season for the Scots.

“There is some pressure on me to stop those big plays. If we have a busted coverage, that’s six points.” -Ford Frazar He matches up against elite receivers such as Rockwall’s Jaxon Smith-Njigba (committed to Ohio State) and Frisco Lone Star’s Marvin Mims (committed to Stanford).

“It’s been a pretty big transition, stepping up to starting on the varsity level,” Frazar said. “There is some pressure on me to stop those big plays. If we have a busted coverage, that’s six points.”

Frazar, who also is a lacrosse standout at HP, often is asked why he doesn’t play golf. That’s because his father, Harrison Frazar, is a former tournament champion on the PGA Tour. Harrison Frazar also was a two-time state golf champion at HP during the late 1980s, and later was teammates with Justin Leonard at the University of Texas.

Ford enjoys playing and watching golf, but he’s never felt the same passion he does for football, lacrosse, and even baseball.

“Golf runs in my family, but I didn’t want to follow in his footsteps,” he said. “I play during my free time, but I don’t want to make a living doing it.”

Ford’s parents have been supportive. His father has even helped out with coaching youth lacrosse teams for Ford and his younger brother, Slayden.

He became a cornerback at the suggestion of his middle-school coaches and has learned to embrace the position while learning from his older teammates who were on the field during last year’s state championship run — and who have given plenty of wear and tear to the turnover can.

“I’d rather use it in a game than in practice,” he said.

UP Dad Pushes Limits in 155-Mile Race For Charity