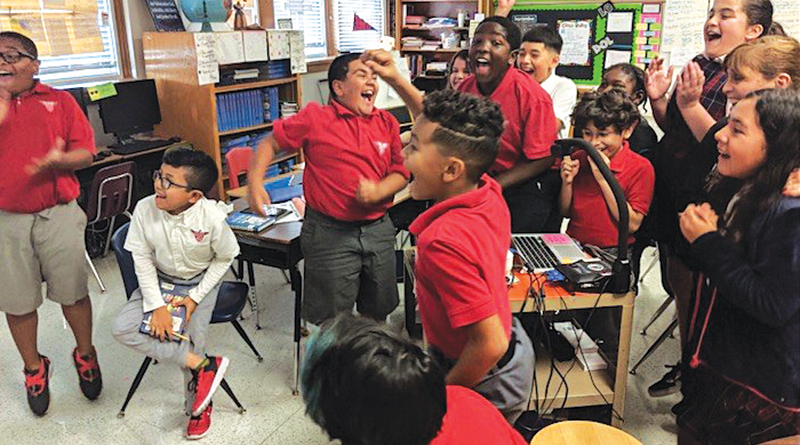 Since its start as a schoolhouse in 1914, Walnut Hill Elementary (then Walnut Hill School) has been a mainstay of the communities it serves.

The school won its first Blue Ribbon in 1999, and a second this year.

The Blue Ribbon distinction is awarded by the U.S. Department of Education and recognizes schools where students are performing at very high levels.

“We want to be a school the neighborhood can be proud of.” -Phillip Potter

Principal Phillip Potter said buy-in from teachers, staff, parents, and students was vital in creating a campus culture that results in accolades like the National Blue Ribbon.

“It’s about setting a vision and setting goals, and being transparent with your staff as to where you are in that,” said Potter, who added that he inherited a great campus culture from previous principal Chase McLaurin.

“We are a place that values diversity and celebrates authentic, genuine student work – you can see it displayed all over campus,” he said.

But even though Potter felt confident in his school’s trajectory, September’s announcement was still a thrill.

“It was very inspiring – and confirming that we are headed in the right direction,” he said. “It was also so great to see the kids and our teachers reacting to the news.”

Walnut Hill Elementary sits in between two popular private schools — Episcopal School of Dallas and St. Monica Catholic School. With so many options nearby, Potter said people are sometimes surprised at what his school offers.

“They can get a great quality education here,” he said. “I just gave a school tour to a family that was shopping for their school, in fact.”

“We offer a dual-language program, but we also offer a general education program that is designed to recognize student talent,” he added. “We also have a bilingual program that allows Spanish speakers and English speakers to learn together. We’re a small campus, but we have a variety of programs.”

“When you visit the campus, you can really get a sense of the culture here. We offer a world-class education, tucked away in our neighborhood.”

Potter said he appreciates the support the school gets from the neighborhoods around it, too.

The U.S. Department of Education will fete the schools at a November awards ceremony in Washington, D.C.