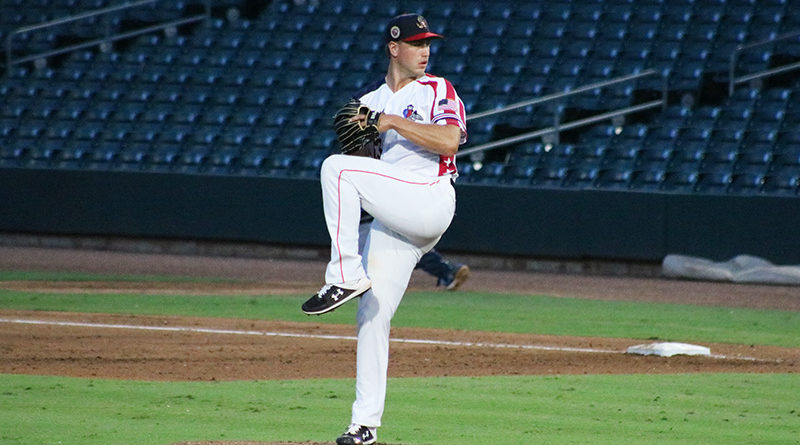 Cason Sherrod could fuss about the long bus rides, the low-end accommodations, or the thankless chores that often come with life as a minor-league baseball player.

He prefers to keep a positive outlook because at least Sherrod is still pitching. And he’s had to overcome far more significant obstacles along the way.

Sherrod, a 6-foot-4 right-hander, has filled various roles this season in the bullpen for such teams as the Clinton Lumberkings, the Batavia Muckdogs, and the Jupiter Hammerheads.

“It’s been kind of a roller coaster,” Sherrod said.

His success and perseverance are even more impressive when you consider that Sherrod is 53 percent deaf in both ears — a byproduct of being born two months premature 23 years ago.

“You learn to deal with it and find ways to overcome it. It’s part of who I am.” -Cason Sherrod

After initially struggling to cope with his hearing loss, both on and off the field, Sherrod began wearing hearing aids on the mound in high school. He credits longtime W.T. White High School head coach David Shepherd with easing that transition and the social stigmas that came with it.

“You learn to deal with it and find ways to overcome it,” said Sherrod, who hopes to become a role model for other baseball players who share his affliction. “It’s a part of who I am.”

Sherrod was part of Shepherd’s final senior class during his tenure of more than three decades with the Longhorns. His father, Slade, also played for Shepherd during the early 1980s.

The Kansas City Royals initially drafted Sherrod in the 13th round in 2017, but instead of signing, he elected to return to Texas A&M for his senior season. The following spring, the Miami Marlins took him in the seventh round. He made 15 relief appearances in the rookie league last summer.

This year, he wasn’t assigned to a roster before the season, which meant Sherrod participated in extended spring training at the team’s facility in Florida to work on mechanics and control.

“Obviously, I wasn’t happy about that, but I tried to take it as a positive,” he said. “It’s just about staying within the moment and trying to get better.”

In mid-June, he made his season debut for Batavia in western New York, seeing action in three games before being promoted a week later to Clinton (Iowa). He pitched there three times in 10 days.

Since his latest promotion on June 30, he’s been a fixture in the bullpen for Jupiter a Class A team just north of West Palm Beach. It’s allowed for some stability for Sherrod and his wife, Chandler, who still call the Dallas area home during the offseason.

“Finding that routine can be tough when you’re bouncing around,” he said. “You can’t control it, so you don’t worry about it.”

W.T. White or Jesuit? The Choice is Yours.