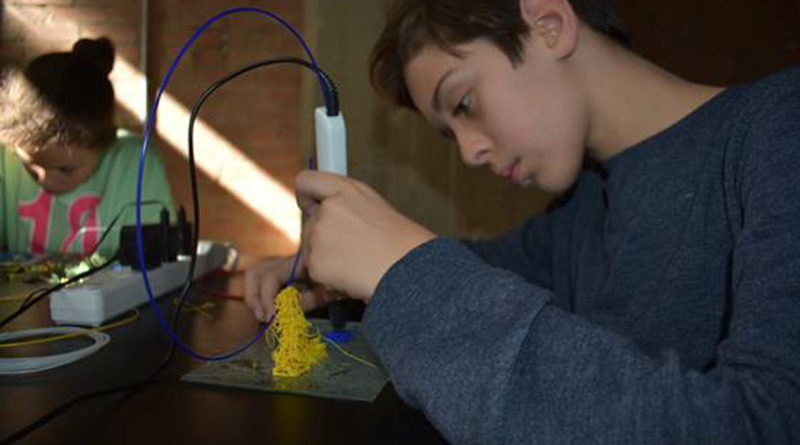 A year ago, Park Cities resident Berry Cox’s eyes lit up as he watched students tackling a variety of projects at SPARK! Dallas, a four-year-old nonprofit whose mission is “to ignite the spark of creativity inherent in all children.” The students, ages 10 and up, were using high-tech equipment like 3D printers and robotics, exploring the arts through pottery and music recording, and immersing themselves into the digital world of Adobe Illustrator, MIT scratch programming and app development. On hand were young, talented and specially trained college students ready to lend assistance when needed.

That day Cox was witnessing a pilot program called Creator Studio, one of the many exceptional offerings at SPARK!.

For Cox, son of Edwin L. Cox (of the SMU Business School), the image of students happily playing and problem-solving brought back memories of his days at Greenhill School enjoying after-school community programs.

After realizing that teens from underprivileged neighborhoods were often missing out on these types of hands-on “maker” opportunities, he took action. He corralled a school bus, and, once classes had finished, spent his junior and senior year picking up students so they also could be a part of these special activities.

Spurred by that high school flashback and wanting to create a similar opportunity, Cox and his son, Justin, jointly funded a challenge grant through the Berry R. Cox Family Foundation to officially launch the program at SPARK!.

Within months, the goal was met and the SPARK! Creator Studio made its debut in December 2018. Thanks to him and other donors, youth are now enjoying the benefits of the free maker-space technology, combined with a tinker studio and computer lab. ”By exposing children to all these different things, it can build confidence and often help them find something that they are not only very good at, but in many cases, in which they are extremely talented,” Cox said. “They become more interested in school, tend to behave better and subsequently feel better about themselves.

“Lots of world-class talent is hidden in these children that they’re not even aware of until they get exposed to this program. It’s fun, too.”

The Creator Studio is just one of the many successes that the young arts-and-education organization is celebrating. In June 2015, the doors opened to a converted basement space at Southside on Lamar, and by year’s end, 1,775 students had been served. To date, SPARK! has connected with 49,944 youth and attracted 80,000 visitors.

Their audience is second grade through high school students, and more than 40 percent of children served are from low-income families.

Costs for school activities and field trips vary depending on the activity and the school’s socioeconomic status. Family Days, which are open to the public, are offered Saturdays and Sundays for $10 per person.

“Creator Studio is just one example of how we allow kids to pursue their passion projects,” said Beverly Davis, founder and president/CEO of SPARK!. “When activities are prescribed, kids and teens are either unimpressed or participate at a more measured level of enthusiasm. However, when they experiment and choose their own project, we see a big difference. They thrive, take more risks, work through trial and error, dig deeper, and, best of all, they stick with the project longer.”

So why is creative learning so important for children?

Davis reports that children who define themselves as creative have higher self-esteem and better problem-solving skills. They’re more likely to score higher on their SATs, finish high school, attend college and graduate.

She adds that children begin exploring their creativity around second grade, and, by age 16, define themselves as “I am” or “I am not” creative.

Carrying that creative spirit beyond childhood is crucial. Adults who define themselves as creative are more likely to consider themselves happy, participate in local politics, and attend arts and cultural events.

Additionally, the business world values creativity as well, with CEOs recently rating creativity as the top leadership skill of the future.

That’s why, at SPARK!, they treat creativity like a language, giving kids a chance for total creative immersion in a vibrant, nurturing environment packed with colorful, hands-on activities.

Currently, the organization is bursting at the seams, and the 11,000-square-foot space doesn’t allow for SPARK to keep up with the demand for programming. Field trips sell out early and, in 2018, 5,503 students were turned away due to lack of capacity.

With the 4-year birthday approaching in June, Davis acknowledges that her board is exploring the possibility of moving to a larger location. In the meantime, she’s grateful to the Coxes and the many other donors who support SPARK!