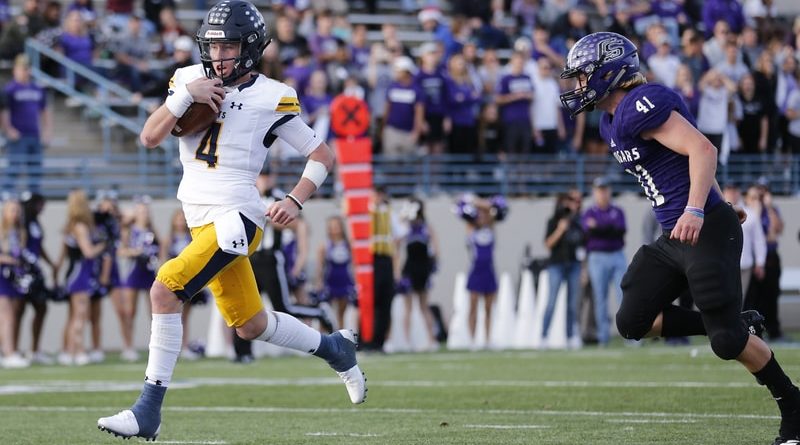 That was the recipe for Highland Park to turn a six-point deficit into an eight-point lead as part of a 28-20 victory over College Station on Saturday in a Class 5A Region II area round playoff game.

The unbeaten Scots (12-0) rallied from their first halftime deficit of the season to win their 27th consecutive game, setting a new school record. Plus, they advanced to face District 6-5A foe Mansfield Timberview — a team they already defeated by five touchdowns — next week in the regional semifinals. That game is slated for 1 p.m. on Dec. 1 at The Star in Frisco.

HP escaped the second round — against last year’s Class 5A Division II state champions, no less — thanks to a pivotal sequence late in the third quarter in which Chandler Morris threw long touchdown passes on back-to-back snaps to Benner Page (86 yards) and Drew Scott (73 yards) to put the Scots ahead for good.

While those plays helped enliven a struggling HP offense, which committed three turnovers, the Scots defense shut down College Station in the second half.

“If you’re not having your best game, you’ve got to find a way to win, and our guys did,” said HP head coach Randy Allen. “That’s what it takes in the playoffs to survive.”

The teams exchanged miscues to open the game. The Scots failed on a fake punt attempt on their first drive, giving the Cougars (9-3) the ball at the HP 34-yard line. But Colby Hopkins intercepted a deflected pass on the next play.

The Scots took advantage of the second chance, finding the end zone on a 4-yard pass from Morris to Finn Corwin, who finished with a game-high nine catches for 144 yards.

The Cougars answered with consecutive scoring drives, each capped by a touchdown run from quarterback Brandon Williams. His 2-yard plunge into the end zone gave College Station a 13-7 lead early in the second quarter.

HP had a stiff breeze at its back, but missed a pair of scoring chances before halftime. College Station’s Brandon Joseph intercepted a pass in Cougars territory midway through the second quarter. And later, the Scots were stopped on fourth-and-2 at the College Station 7.

“We were pretty frustrated in the first half,” Allen said. “We turned the ball over a couple of times, and had a couple of really short punts that gave College Station good field position. We knew we could play better than that.”

HP continued to struggle early in the third quarter, fumbling again near midfield on their second possession after the break. College Station linebacker Brandon Sacky recovered.

The Cougars subsequently pinned HP deep with a punt. But Morris found Page uncovered in the middle of the field, and the senior running back raced over the goal line, giving HP a 14-13 advantage on the Scots’ longest play from scrimmage this season.

Moments later, the big play to Scott was timely because it gave the Scots a cushion prior to flipping the field for the final quarter, when HP again drove against the wind.

“Mentally, we needed to be ahead by the time we changed to the fourth quarter, so those two scores were big,” Allen said. “We felt a little better about ourselves after that.”

The Scots squandered a scoring opportunity early in the fourth quarter when College Station’s Bubba Carter fell on an HP fumble at the 1-yard line. That stopped an otherwise impressive 13-play, 96-yard drive that started at the HP 3.

Nevertheless, the HP defense continued to make stops, thanks in part to Prince Dorbah’s two key sacks. The Scots added an insurance touchdown with an 82-yard drive in the fourth quarter that included a 35-yard connection from Morris to Corwin. Morris scored on a 29-yard run to make the score 28-13 with 2:07 remaining.

“Offensively, we had a couple of situations where we put ourselves behind the chains,” said College Station head coach Steve Huff. “We had been able to get yards on first down, and when we do that, we were able to run the ball. When we got off schedule, we put ourselves in a bind.”

College Station climbed back within eight points after a 13-yard touchdown pass from Williams to Joseph in the final minute, but the ensuing onside kick went out of bounds, allowing HP to run out the clock.

Morris found a rhythm after halftime. For the game, he completed 25 of 36 passes for 396 yards and three touchdowns in addition to the rushing score. Scott tallied five catches for 112 yards. As a group, HP amassed 537 total yards, more than doubling the Cougars’ output.

Williams was a bright spot for the Cougars, completing 16 of 28 throws while rushing for a game-high 88 yards on 25 attempts with two scores. He also averaged more than 40 yards per punt.

Next up, the Scots face a rematch with Timberview, which HP defeated 42-7 just two weeks ago in the regular-season finale. However, the Wolves have gotten healthier and gained momentum since then, upsetting The Colony and Magnolia West in their two postseason games thus far.

“We didn’t catch them at their best,” Allen said. “Their quarterback was out with an injury when we played them, so they’ll be a totally different team. Right now, they’re a hot football team.”

Playoffs in Sight As HP Wraps 15-5A Slate