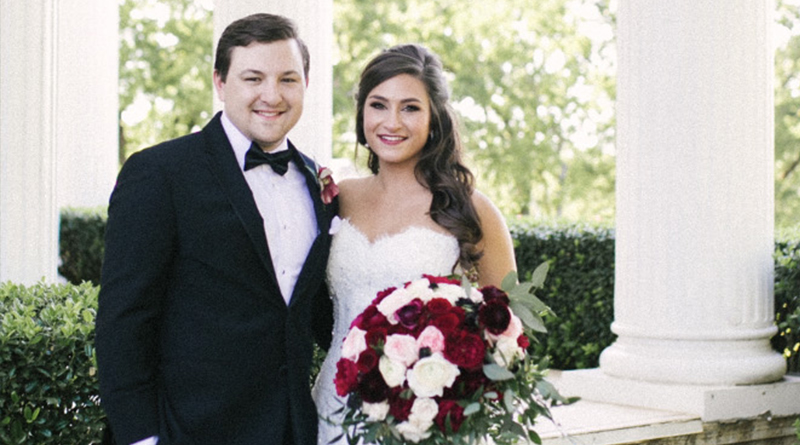 Emily Elizabeth Early and David Ryan Rekieta were married Saturday, April 28, 2018 at The Lone Star Mansion in Burleson, Texas. Trey Russ, the couple’s brother-in-law, officiated their ceremony. A reception of dining and dancing with a scrumptious cake modeled after the couple’s English bulldog followed, also at The Lone Star Mansion. Emily and Ryan chose “Feet Don’t Touch the Ground,” by Stoney Larue for their first dance as man and wife. The parents of the groom hosted a rehearsal dinner at Reata in Fort Worth, Texas on Friday night.

The bride was presented in marriage by her parents. She was escorted down the aisle on her father’s arm. Emily wore a stunning David Tutera ivory modified A-line gown with lace bodice and buttons down the back. She paired it with a custom Toni Federici chapel-length veil. Emily carried a bouquet of peonies, with maroon and ivory roses.

Assisting the bride as maid of honor was Camille Driver. Her bridesmaids included Alexandra Spiller, Summerlin Northrup, Catherine Taylor, Katie Cane, and Emily Rekieta. Among the members of the house party were the bride’s cousins: Christina Wheaton, Ivy Sudduth, and Crista Hall.

The bride is a graduate of The Cambridge School of Dallas. She received a Bachelor of Science in nursing from Baylor University where she was also a member of Delta Delta Delta sorority and Sigma Theta Tau honor society of nursing. Emily is a registered nurse in the operating room at Texas Institute for Surgery.

Following their honeymoon in Grenada, the couple have made their home in Dallas.