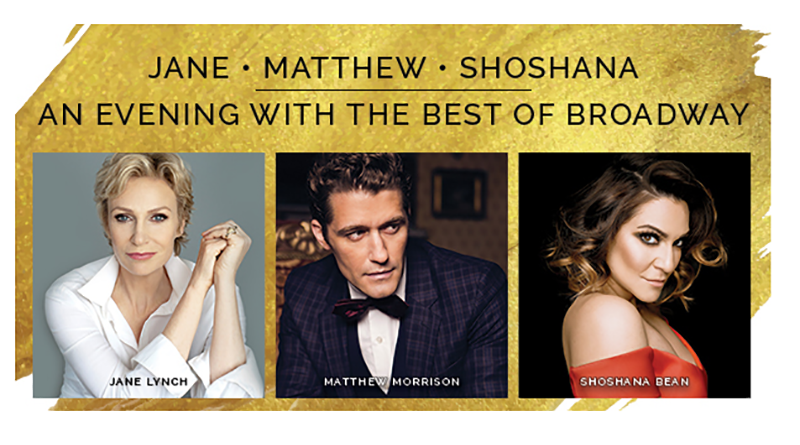 Mark your calendars for an evening with the Best of Broadway this November.

The 2018 DSM Gala is an annual event celebrating the magic of musical theater, with proceeds supporting DSM’s nonprofit mission to bring the very best of Broadway to North Texas and its education and community programs.

“We are ecstatic to announce this lineup of powerhouse names set to perform at the 2018 DSM Gala,” said DSM Gala Co-Chair Cara Owens.

An Evening with the Best of Broadway is an annual celebration of DSM and the magic of musical theater. Lynch and Morrison are famed for their work in the musical-comedy television series Glee and Bean is a renowned Broadway performer.

Lynch, who will serve as the event’s emcee, is renowned for her comedic timing and versatile range. She is best known for starring alongside Morrison in the hit television show Glee as the one-liner powerhouse coach “Sue Sylvester”. For her role as Sylvester, Lynch won numerous awards, including the Emmy Award for Outstanding Supporting Actress, Golden Globe Award for Best Performance by an Actress in a Supporting Role and the Screen Actors Guild Award for Outstanding Performance by an Ensemble in a Comedy Series

Morrison has also accumulated a vast collection of reputable career spotlights, receiving his big break after winning the role of “Link Larkin” in 2002 the original Broadway cast of Hairspray. He was nominated for a Tony Award for his role in The Light in the Piazza and most recently appeared on Broadway as “J.M. Barrie” in Finding Neverland for which he received two Drama Desk Award nominations.

Bean is highly regarded in the Broadway community for her varied and versatile performances. She is best known for being the first to take over the role of “Elphaba” in the original Broadway production of Wicked, following the departure of Idina Menzel. Her most recent Broadway credits include “Fanny Brice” in Funny Girl and “Cee-Cee Bloom” in the new musical adaptation of Beaches, for which she earned a Jeff Award nomination for Best Lead Actress in a Musical.