COLLEGE STATION — Phillip Quinn will graduate from Highland Park as one of the most decorated tennis players in program history.

At a school that, as a whole, is more decorated than any other in the state, that’s saying something.

Quinn and partner Katherine Petty capped an undefeated season with a straight-sets victory in the championship match of the mixed-doubles bracket at the Class 5A state tournament on Friday.

“He’s in the top two or three boys for sure to have ever come through with total medals,” said Highland Park head coach Dan Holden. “Then the leadership makes such a big difference too. His work ethic and everything, he’s going to be tough to replace.”

Since joining the team in fall 2014, as a part of the Scots’ team state tennis championship run that season, Quinn has earned five gold medals — three in the fall, and two in the spring.

He reached the mixed-doubles final at state in all four years, twice finishing as the runner-up at the 6A level before breaking through during his junior year.

What makes the run more impressive is the fact that Quinn was in the state finals of mixed doubles every year with a different partner — Margo Taylor, Chandler Carter, Madison McBride, and now Petty, who lost in the girls doubles final a year ago.

“I didn’t want to go out second again,” Petty said. “I really wanted to finish off with the gold. It was extra work, extra time on court, extra motivation.”

The duo dropped just four game in three matches at state — twice winning 6-0, 6-0, including in the championship match against Ethan Evans and Nikki Boyar of Boerne Champion.

“Katherine’s done an amazing job,” Quinn said. “She’s even hungrier than I was. She took care of her business every single time she stepped on the court.”

The Scots saw each of their other state representatives eliminated in Thursday’s opening round. In boys singles, Peyton Dooley lost in three sets to Amarillo’s Tauber Short.

Quinn will play college tennis next year at The Citadel. Knowing that his high school career is over hadn’t hit him on Friday, as he stood with a gold medal draped around his neck one last time.

“Not only is he decorated and accomplished but he’s also a great leader, one of only three two-time captains we’ve ever had,” Holden said. “I couldn’t be more proud of him. He made us better all year with his work ethic and his leadership.” 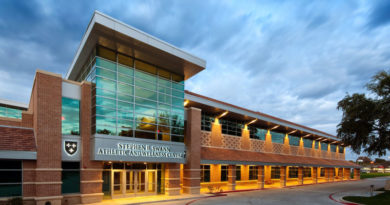