The 2018 A Chance to Soar luncheon benefiting Jonathan’s Place took place on April 3 at the Hyatt Regency in Dallas. A record 920 guests, along with luncheon chairs Robyn Gould and Linda Wimberly, raised more than $350,000 for the organization the highest ever raised in the luncheon’s history.

Notable sponsors of the A Chance to Soar luncheon included The Ted and Shannon Skokos Foundation, Rachel and Brad Stephens, American Airlines, Marianne and Roger Staubach, Jennifer and John Gates, Propac Agency, and Macy’s. Receiving special recognition were Ted and Shannon Skokos as honorary chairs, and Jessica Stubbs received the Award of Compassion for her long-term support of the non-profit as a foster parent. The annual A Chance to Soar luncheon is Jonathan’s Place’s largest fundraising event each year, providing a significant source of revenue to fund its ongoing operations.

Jeannette Walls, author of the best-selling memoir, The Glass Castle shared her harrowing, personal journey as the keynote speaker of the seventh annual A Chance to Soar luncheon benefiting Jonathan’s Place. The Glass Castle details her life growing up in extreme poverty and the tale of her emergence from it. Named by Amazon in August 2017 as one of the top 10 books of the decade, her inspiring story was brought to the big screen in one of the most highly-anticipated major motion pictures of the year starring Woody Harrelson, Naomi Watts and Brie Larson as Jeannette. On stage, Jeannette took the audience inside her resilient journey in pursuit of authenticity, revealing the power of courage and determination in overcoming unimaginable obstacles.

Jonathan’s Place, a prominent nonprofit organization in Garland, offers a safe place, loving homes and promising futures to abused and neglected children throughout North Texas. To date, the organization has served more than 5,400 children through its residential programs including an emergency shelter, a girls treatment program, a foster care and adoption program, a transitional living program, as well as the National Safe Place runaway prevention program. April is known nationally as Child Abuse Prevention Month, and Jonathan’s Place believes that every child has the right to a safe childhood free of violence. 25,092 alleged victims of child abuse/neglect live in Dallas County, which is the 3rd highest total in the state. 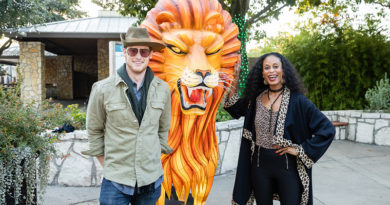 Bill Nye The Science Guy, Anyone?