The Conservancy successfully hosted an afternoon of Easter fun for thousands of Dallasites, their families, and their dogs on Easter Sunday at the 52nd Annual Easter in the Park. Hours before festivities began, attendees began flocking to Oak Lawn Park on Turtle Creek raising tents, spreading blankets and unfolding chairs to reserve spots on the lawn. At 1 p.m., the celebration started, and children and adults from all over Dallas joined on the sprawling lawn, which turned into a sea of crazy hats, costumed pups and pastel colors.

The fun began at 1:30 p.m. with a massive Easter Egg Hunt, presented by Texas Capital Bank. President and CEO of The Conservancy Gay Donnell welcomed the crowd of kids and parents and then the hunt began! In a matter of 15 seconds, all 6,000 eggs were gathered up by children and placed into their festive baskets.

Immediately following the Easter Egg Hunt, the crowds made their way to Turtle Creek Boulevard, which was closed off for The Conservancy Pooch Parade. Celebrity emcees, LeeAnne Locken and Steve Kemble, took the stage to kick-off The Pooch Parade and introduce the panel of local celebrity judges including: morning dose. Host Laila Muhammad, The Conservancy President and CEO Gay Donnell and Dallas Voice Publisher Leo Cusimano. DJ Jennifer Miller began playing music as dozens of registered dogs and their owners meandered down Turtle Creek Boulevard, showing off creative canine costumes. Some of the dogs participating in The Pooch Parade were led by volunteers and were available for on site adoption from non-profit animal rescue organizations including: Dallas Animal Services, SPCA and Recycled Pomeranians & Schipperkes. The winner of the Best Overall costume was ‘Cleopatra’ in an Egyptian frock and eponymous black wig, riding on an ornate golden chariot with his master in Roman costume. 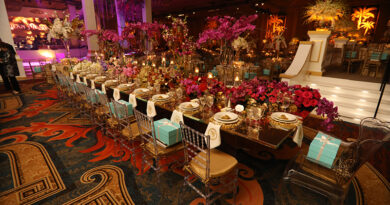