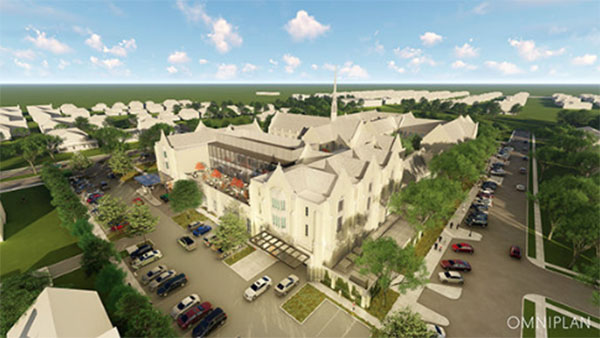 A growing group of neighbors near Highland Park Presbyterian Church have expressed concerns over a yet-to-be drafted public development agreement between the church and city of University Park.

McFarlin Road resident Bob Dill said concerns center around what appears to be an effort by HPPC to use the agreement to skirt the planning and zoning process to use two of its single-family residential properties as construction sites and close Shannon Lane, a heavily used neighborhood thoroughfare. The two items were originally part of the church’s request to build an underground parking lot – a plan that’s changed at least twice to appease neighbors during the past seven years. However, to comply with the Planning and Zoning Commission’s order to keep construction “on existing campus,” the church removed the two items from its application.

It worked, and the commission unanimously passed the church’s request to amend its planning development district to demolish its Hunt Building and construct a three-story building above an underground parking lot.

Dill said the approval looks like a “win, win” for everyone involved. But, he remains concerned about the possibility of a public development agreement that could include using the homes for construction sites and closing Shannon Lane.

[pullquote-left]“We are very cautious because they [church leaders] haven’t been straightforward through the entire process.” -Bob Dill[/pullquote-left]

“We are very cautious because they [church leaders] haven’t been straightforward through the entire process,” Dill said. “Everything we’ve found out [about the private development agreement] has been through the back door.”

Right now, the PDA doesn’t exist. And getting city or HPPC officials to discuss it has been unfruitful.

“Call me when it’s an agenda item,” the church’s representative Dallas Cothrum said when asked if HPPC would try to include the two items in a PDA.

While Cothrum said it’s too early to discuss what would be included in an agreement, he addresses the issue in a March 23 letter to Patrick Baugh, the city’s community development director.

If the church chooses to move forward with the private development agreement, officials say it will have to be approved by the City Council – a step Dill said he has full faith in.

“It’s going to have to stand on its own legs,” he said.

The city has used a handful of public development agreements in the past, such as with the Bush Library and at The Plaza at Preston Center. But UP communication director Steve Mace said it would be like comparing apples and oranges to compare any of them.

As to why the city would have suggested such an agreement and whether it could include closing Shannon Lane or using homes as a construction site, Mace wasn’t able to provide answers, because “it’s tough to talk about an agreement that doesn’t exist.”