About this time last year, the church announced preliminary plans that would have demolished six of the church’s aging rental homes near Shannon Lane to build an underground parking lot topped with 1.5-acres of open green landscaping.

“It was a nice plan,” said Ross Coulter, of the Coulter Group, “but what they (the Campus Vision plan committee) were finding was, one it was a lot more expensive than initially expected, and then the church just had a question about stewardship.

“We’re investing a whole chunk of the project to just a stand-alone garage. There was probably a better way to be good stewards of our money.”

The updated campus vision plan, instead, will focus on rebuilding the Hunt Building with two levels of underground parking for 150 cars. Plans also include a new addition and major renovations to the Highland Kids Ministry building, and other renovations that will improve substantially campus flow and usage.

All construction will seamlessly match the Gothic Revival style of the existing building, and be contained within the confines of the campus footprint.

“This is an important project for our church, to match our campus to our vision,” said Clay Sell, chairman of the church’s campus vision team. “By working creatively with our architects and contractors, we have come up with a solution that best meets the needs of our congregation, while also honoring our neighbors and preserving the single-family character of the neighborhood.”

HPPC filed initial zoning permits with the City of University Park on Jan. 12 and will announce additional details as construction plans and schedules are finalized.

Find out more about renovation plans in the March issue of Park Cities People newspaper.

HPPC Honors Past Member Through Concert 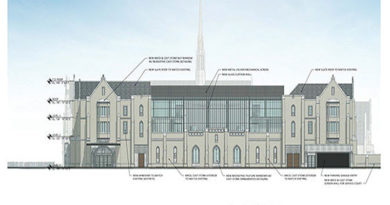