With four straight wins, Highland Park has surged into sole possession of second place in the District 15-5A standings.

The Scots started the second half of the league schedule with an impressive 64-59 win over West Mesquite on Tuesday, avenging a narrow loss from the district opener in December. Will Enzor’s 31-point game led HP during a fourth-quarter comeback, while Alex Staffaroni added 14 points.

That game followed an 84-67 triumph against North Forney on Jan. 19 in which the Scots (17-8, 6-2) had one of their best offensive games of the season. Cade Wagner paced HP with 22 points and Enzor contributed 17.

The Scots will travel to face Mesquite Poteet on Friday before returning home for a pivotal home game on Jan. 30 against Forney. 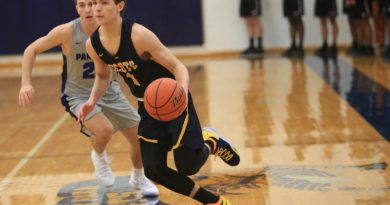 Have a Ball and Meet the Scots on Monday