ARLINGTON — John Stephen Jones’ era at Highland Park will always be known for producing two state championships thanks to an ability to thrive in situations where lesser teams wilt.

The “refuse to lose’’ attitude was absolutely necessary for a 53-49 heart-stopping victory over Manvel in the Class 5A Division I state title game on Friday at AT&T Stadium.

“There’s a little magic about John Stephen,’’ said HP head coach Randy Allen. “He’s the best at making something out of a play when it is not there.’’

Despite being sacked a record seven times in the first half, there was Jones down the stretch, keeping his team in it with clutch passes and then encouraging his teammates on the sideline when the defense tried to somehow slow down Manvel.

“I had a ton of doubt after we got stopped with four minutes left,’’ said wide receiver Cade Saustad, “but John Stephen kept telling us we had a chance.’’

When Highland Park was stopped on Jones’ fourth-down incompletion with 4:15 remaining, HP trailed 49-39. And to that point in the fourth quarter, Manvel had run one play from scrimmage and scored 14 points.

But the Scots defense forced a punt and Jones engineered an 87-yard, seven-play scoring march capped by Jones’ 1-yard keeper to pull the Scots within three points.

A miracle was still required. With 2:08 to go and only one timeout remaining, an onside kick was HP’s only chance. Matteo Cordray has been working all season on an onside kick in which he fakes in one direction and kicks to the other.

“If I did it 10 more times, I don’t think I could have kicked a better one,’’ said Cordray. He faked left and his kick to the right took a big hop and nestled into the hands of Saustad.

“It was my biggest catch of my night,’’ said Saustad, who finished with 12 pass receptions for 220 yards and three touchdowns.

On the go-ahead 45-yard drive, HP faced one more crisis, a fourth-and 15 at the Manvel 39 with 1:11 remaining. After calling a final timeout, Jones unleashed a perfectly measured throw to Finn Corwin for 28 yards.

Two plays later, Jones found Saustad on a 16-yard slant for the Scots’ first lead of the night with 34 seconds remaining.

“I was afraid we scored too fast,’’ Allen said. “Manvel is as good as any team I’ve ever played and certainly the most explosive.’’

From its 28, Manvel needed only two plays to reach the Scots 31. After just missing on a potential touchdown reception, Mavericks receiver Jalen Preston was tackled at the 1 on the game’s final play.

“Honestly, I’ve never been in a game like that,’’ said Jones. “That why we go to practice and work hard every day. When we got the onside kick, I was thinking let’s take advantage, let’s execute.’’

Allen said his quarterback continually reminded his teammates if they could stay within three points, there was a chance something could happen at the end.

Jones threw for 564 yards and Kason Martin, a University of North Texas signee and the son of the Manvel coach, had 483 for the Mavericks.

“Some people might say that Jones is all hype, but I tell you he’s a baller,’’ said Martin. “I told him after the game I’m sure we’ll run into each other at the next level.’’

“Knowing that it is the last game I’ll coach him is emotional,’’ said the coach. “That’s life. He’ll be a better man because of it.

“It is tough to beat [Highland Park] at their home.’’ 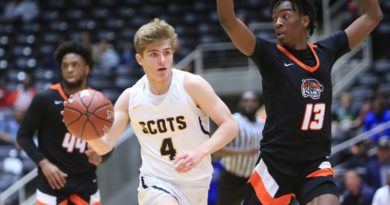