Despite being the most decorated program in the state’s venerable gridiron history, Highland Park can still make history on Friday night.

HP has more wins all-time than any other team. It also has the most district titles and is tied for the most playoff appearances.

Yet in almost a century of football, the Scots have never won back-to-back state championships, which is something they’ll try to accomplish on Friday against unbeaten Manvel at AT&T Stadium.

In three previous attempts to repeat, HP has posted double-digit victories and won a district title each time, but has been bounced early in the playoffs. Most recently, after winning the 5A crown in 2005, the Scots fell in the second round in 2006.

A victory on Friday would also allow tie the school mark for wins in a season with 15. HP previously reached that number during its unbeaten title run in 2005 and again in 2007, when the Scots lost to Lake Travis in the championship game.

HP has scored 679 points this season, which is 47 points shy of the school mark set by the 2005 squad. That also could be in reach during what’s widely expected to be a high-scoring title game.

The Scots surpassed 100 playoff wins in school history during the current playoff run, which ranks sixth among schools from any classification.

So HP’s postseason pedigree is strong, but so is its potential home-field advantage against Manvel, which will travel from the Houston area to play in Arlington for just the second time, after falling to Aledo in the 5A Division II championship game in 2011.

Meanwhile, the Scots are 9-0 at the home of the Dallas Cowboys during the past five seasons, and haven’t lost there since their debut in 2010 in a regional semifinal against Mesquite Poteet.

In other words, the Scots should at least be equipped to handle the pressure of the moment and the venue, where they’ll face the most intense of Friday night lights. 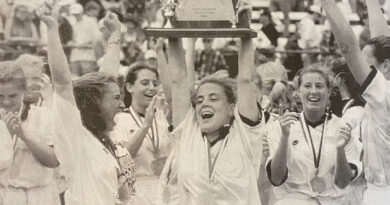