Hockaday alumna Mary Clare Beytagh has been named one of 32 American Rhodes Scholars for 2018.

She is the third Hockaday alumna in 10 years to receive the Rhodes Scholarship. Libby Longino Cohen (Class of 2006) received the scholarship in 2010 and Laura Roberts (Class of 2012) received it in 2016. Beytagh graduated Hockaday in 2014.

“I am honored and humbled to have been selected from the outstanding group of finalists from District VIII,” Beytagh said. “They were all exceptionally talented and kind, and I am lucky to have met them.”

At Hockaday, Beytagh became interested in science while interning for The University of Texas Southwestern Medical Center’s biomedical research program. Beytagh is currently pursuing a double major in biology and literature at the Massachusetts Institute of Technology and plans to study integrated immunology at Oxford to prepare for her future career as a physician-scientist.

Her experience at Hockaday created a foundation for her chosen fields of study, she said.

“Hockaday shaped me into the woman I am today, teaching me to lead with grace and conviction and inspiring me to live my life in the service of others,” she said.

The Rhodes Scholarships were created in 1902 by the Will of Cecil Rhodes. Rhodes Scholars are chosen in a two-stage process. First, applicants must be endorsed by their college or university, and then Committees of Selection in each of 16 U.S. districts invite the strongest applicants to appear before them for an interview. Applicants are chosen based on the criteria of intellect, character, leadership, and commitment to service in hopes that the men and women selected will make an important and positive contribution throughout the world. For more than 115 years, Rhodes Scholarships have provided all expenses for two or three years of study at the University of Oxford in England and allow funding for four years if needed. This year’s recipients were selected from 866 applicants at 299 schools throughout the United States and will join international recipients at the University of Oxford in England in October 2018. 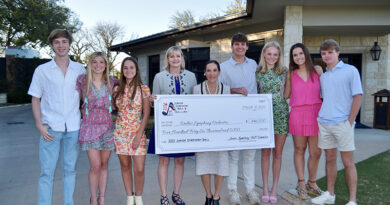