“It was a lasting humiliation that he still reminds me of,” said Bass, chuckling.

Pals since first grade at Arthur Kramer Elementary from 1963–70, their 54-year friendship is strengthened by having their businesses across the street from each other in the Dallas Design District, and by their ongoing ties to Dallas ISD schools.

Riding mini-motorcycles, playing ping-pong and touch football, talking on hand radios, staying out late, even running a lawn mowing business, the two were close growing up in Preston Hollow.

Both boys went on to Benjamin Franklin Middle School and then Hillcrest High School. Bass continued playing sports. Rubin, when not working at a restaurant, had his fun with a “rougher crowd.”

Bass said although their interests and friends differed, “there was a lot of crossover between their cliques,” and the friendship continued.

After graduating from Hillcrest in 1975, the two parted ways for college, seeing each other only at reunions or events over the years.

But in 1998, their friendship rekindled when Bass took over a golf tournament benefiting classmate John McClamrock, who had been paralyzed playing football in 1973. Bass contacted classmates, and enlisted Rubin’s help.

After McClamrock’s passing in 2008, the fundraiser became the John McClamrock Memorial Scholarship, through which $5,000 is awarded annually to a graduating Hillcrest High School senior who has overcome adversity to achieve personal and academic success.

Bass plans to create other fundraising campaigns to keep the scholarship going. Whatever Bass decides, Rubin said, “I stand ready to be Brendan’s soldier at the drop of a hat.”

Not only does Bass get a “warm and fuzzy glow” from providing scholarships to appreciative children, but it also keeps him in contact with the school and with former classmates. Bass said the different groups from high school are still intact, and very close.

Although Bass and Rubin’s businesses located in the Design District could not differ more—Bass runs an interior design showroom, and Rubin a food service supply, Lane and McClain Distributors — the two get together often to talk about business and about the neighborhood.

Being around Rubin brings up feelings of nostalgia, Bass said.

“We lapse back into the same repartee, the same level of juvenile humor,” Rubin said. “It has been very pleasurable for both of us to still be in close touch with one another. The fact that we ended up owning businesses across the street from each other was really, really cool.” 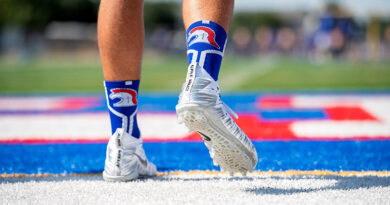 Back for Seconds: Hayes Returns to Help Rebuild TCA