NASA astronaut Tom Jones wasn’t much older than the Lamplighter School students he spoke to recently when he set his heart on someday reaching the stars.

His began at age 10, when he was living in Baltimore, Maryland, and had the opportunity to visit a rocket factory. After observing a rocket being built, he realized how “cool it would be to ride on one someday,” he told students.

Jones also credited his grandmother for helping to spark his interest in space travel when she gave him a book titled Space Flight when he was 5 years old. At the time the book was published in the 1950s, there were no actual pictures of people in space, just paintings, he said. Yet the book stimulated his interest in the possibility of space travel — and still sits on his bookshelf today.

Education played a key part in reaching his goal, Jones told the students. He studied at the U.S. Air Force Academy and later earned a doctorate in planetary sciences from the University of Arizona.

Following six years of service as a pilot with the U.S. Air Force, Jones began what became a seven-year application process with NASA. He received two “rejection postcards” from NASA before submitting a third application, receiving an invitation to interview, and finally enrolling in astronaut school.

“What was the lesson learned from this process?” he asked the students.

“Never give up!” students shouted.

Jones has spent 53 days in space over four missions, the first at age 35.

The Lamplighter third-graders study a unit on space exploration, which culminates in a collaborative project to design a Mars colony. The science curriculum for kindergarten students includes a space unit that focuses on “things we can see in the sky,” such as the sun, moon, and stars.

The students enjoyed a photo of a “flying cheeseburger” and asked him such questions as, “Do you eat ice cream in space?” “Can you feel how fast the space station is going?” and “What was your greatest fear in space?”

He reminded them that NASA will need new “talented, motivated, inspired explorers.”

Many hands went up when he asked, “Do I have any volunteers?”

NASA’s mission to Mars will likely take place in the 2030s, Jones told them.

“You will all be the right age in 25 years,” he said. “You are the future explorers of the red planet.” 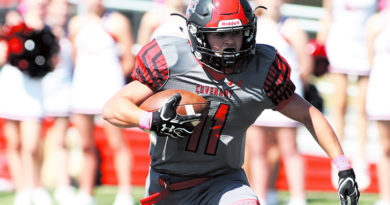