A year ago, Highland Park started the year with a win over Rockwall and ended with a Class 5A Division I state championship.

The Scots would be just fine with a repeat performance, starting with Friday’s season opener against the Yellowjackets at Wilkerson-Sanders Memorial Stadium.

HP will start its schedule with a true road game for the first time in more than 15 years. The Scots hosted Rockwall last year, and played a neutral-site opener in the Tom Landry Classic for 14 consecutive years prior to that. In addition, the Yellowjackets are the only Class 6A opponent on the HP schedule.

That adds up to a significant test for a lineup that will include plenty of fresh faces, some of who played reserve roles during last season’s playoff run.

Still, several of the key contributors during the prior 43-21 win over Rockwall will be back in uniform on Friday, including Paxton Alexander, Cade Saustad, Scully Jenevein, and James Herring.

The Jackets finished 6-6 last season and lost to Coppell in the area round of the playoffs. However, Rockwall has earned at least one postseason victory in each of the last four years and is typically among the top offensive teams in the Dallas area.

Among the top returnees for Rockwall are receiver Cameron Crayton, linebacker Korey Barron, and defensive back Triston Anderson. 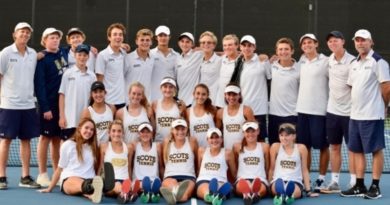 Scots Continue to Dominate on Court