At first it seemed like rocket science. The knobs. The levers. The dusty, circular glass keys that seemed like they would break from the slightest touch.

I’ve assembled computers before, but how to work my great-grandfather’s Royal portable typewriter was a far greater mystery.

My mom rescued it years ago from a musty Florida attic, where it had been sitting for almost a century. There was something about it that compelled her to haul it on a plane back to Dallas — one of only a few possessions that didn’t end up in a Tampa resale store. This same allure was what led me to pull that old machine out of our attic a decade later and discover how what we consider obsolete isn’t necessarily useless.

Typewriters can be more efficient than computers in many respects. If I ever need to add a few quick notes to a handout, all I have to do is feed it through the typewriter. No scanning or printing needed. Physical thank you notes are personal, unlike an email. Typewriters are also naturally inviting — every ding of the bell is an encouragement to keep on writing.

Some of my greatest pieces of writing have emerged from the mechanical mesh of parts that is my Royal portable.

Typewriters aren’t the only objects that have been brought back from basements in recent years. Records have also made an astounding resurgence in popularity. Polaroids are once again manufactured in bulk. Technology that was considered obsolete has broken past hipster culture and into the mainstream. But why this push away from the digital and into the physical?

My favorite songs won’t disappear if I don’t pay $10 a month; my photos won’t vanish if I don’t have a phone charger; and my writing won’t evaporate if I don’t have an internet connection. We’ve reached a point where all our documents are viewed through a phone screen, but things like Polaroids, typewriters, and records separate them. They break down the glass barrier of a phone screen and embrace the creation of something physical. They’re something that can be passed down generations that won’t need to be replaced every two years.

As Richard Polt, a professor at Xavier University, proudly typed in his Typewriter Insurgency Manifesto, “We choose the real over the representation, the physical over the digital, the durable over the unsustainable, the self-sufficient over the efficient.”

When I look at the wheel of my typewriter, I can see both my great-grandfather’s words and my own stamped onto it, mixed together. His statements combine with my writing to leave behind a legacy through a century-old machine. There is no greater testament to the power of words than that.

Does this mean the end of Google Docs and Spotify for me? Will I throw away my laptop? Of course not. But hopefully these decades-old devices will continue to linger in the era of the internet, reminding people that they will always have the power to create something with their hands — something physical.

Fire Up The Grill All Summer Long 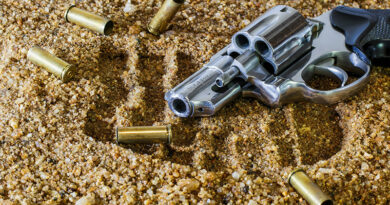