The Greenhill School doesn’t shy away from teaching kids the hard truths about climate change — including that many species, including some in students’ own backyards, face endangerment.

According to the Audubon’s Birds and Climate Change Report, 314 species of North American birds could disappear from their current ranges by 2080.

David Yarnold, president of the National Audubon Society, recently came to Dallas to moderate two panels at Earth Day Texas — a festival held April 21-23 in Fair Park that attracted researchers, filmmakers, and conservationists from all over the world.

Yarnold also took time during his visit to spend a day at Greenhill talking to students in kindergarten through 12th grade about conservation.

“We were really excited to have this person who was a specialist and coming to speak with us from an organization that is so revered, one of the most respected environmental organizations in the country,” said Regina Yunker, first- and second-grade science teacher.

The children were no strangers to the lessons of environmentalism.

Head of School Scott Griggs said conserving the environment is a core part of the Greenhill curriculum.

“The Greenhill students were terrific and very engaged,” Yarnold said. “I was blown away by the sophistication and commitment to the environment I saw at all of the grade levels.”

Teachers at Greenhill spend a lot of time talking about environmental issues — especially ones that impact students personally.

During his visit, Yarnold showed younger students a native plant database where they could plug in their ZIP codes to find natural resources in their area.

With older students, Yarnold shared research about climate change and the potential loss of birds. He focused on the North Texas environment.

“The earlier we can teach people about birds and conservation, the more likely it is they’ll build an appreciation for nature and take steps to protect it,” Yarnold said. “Climate change, pollution, and water all matter to birds and the places they need as well as to people — it’s never too early to get involved.”

Greenhill shared their environmental spirit at Earth Day Texas. Kids and adults came by their booth to build helicopters out of used paper and make art collages out of old T-shirts and other used materials.

“Conservation doesn’t have a party,” Yarnold said. “If we focus on what everyone has in common, bringing people into conservation through their love of birds, we can work toward common-sense and science-based solutions.”

Got an Opinion on Gas Drilling? 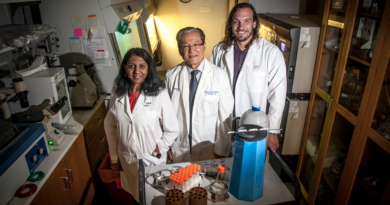