“Presidential Libraries provide people the chance to see, hear, and participate in the important events that made us who we are as a nation,” said Brig. Gen. Patrick X. Mordente, director of the George W. Bush Presidential Library and Museum. “Because of the unique role the military has played in U.S. history, we are particularly proud to be a part of the Blue Star Museums program.”

Visitors to the George W. Bush Presidential Library in Dallas may enjoy Portraits of Courage: A Commander in Chief’s Tribute to America’s Warriors, a special exhibit that brings together the stories of U.S. military veterans who have served our nation with honor since 9/11 and their portraits painted by President Bush. Other museum highlights include A Nation Under Attack, the events of September 11, 2001; a massive 20-foot-tall, 360-degree LED screen showing multimedia clips blending art, history, and entertainment; and the provocative, hands-on Decision Points Theater.

In a new exhibit at the LBJ Library, 10 museums and archives at The University of Texas at Austin, along with the LBJ Library, share some of their most compelling and rare treasures in Deep in the Vaults of Texas: A Campus Collaboration. Running through the end of the year at the Bush Library in College Station, the Legacy of Ranching: Preserving the Past, Embracing the Future exhibit highlights the strong ranching legacies and examines how the livestock industry helped shape the state of Texas.

Free admission to all three museums is available May 29 through September 4 to any bearer of a Geneva Convention common access card (CAC), a DD Form 1173 ID card (dependent ID), or a DD Form 1173-1 ID card. This includes active duty U.S. military – Army, Navy, Air Force, Marines, Coast Guard, as well as members of the National Guard and Reserve, U.S. Public Health Service Commissioned Corps, NOAA Commissioned Corps – and up to five family members. A family member may include a spouse, child, aunts, uncles, or grandparents.

Blue Star Museums is a collaboration among the National Endowment for the Arts, Blue Star Families, the Department of Defense, and more than 2,000 museums in all 50 states, the District of Columbia, Puerto Rico, and American Samoa. The complete list of participating museums is available at www.arts.gov/national/blue-star-museums. 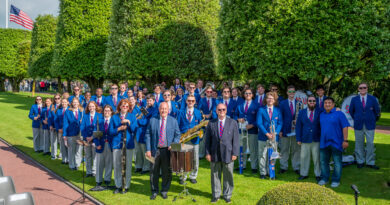 Jackopierce Christmas Show is Back!