“It was so fun to wrap up the four years of our rowing together at our Signing Day,” Villegas said. “It’s something we always talked about. We’ve been best friends since we were freshmen.”

Thompson and Villegas have both been on the crew team for four years, and have competed at the prestigious Stotesbury Cup Regatta each year. In 2014, they finished fifth in the four-person quad. Villegas was a Junior A-Quad Semifinalist at the event in 2015.

“I used to always go to Philadelphia for the Stotesbury Cup and see the old boathouses on the river,” Villegas said. “I never thought I’d be rowing from those boathouses now. Philadelphia is such a big rowing city.”

Five of Ursuline’s six seniors will be Division I rowers in college. Hannah Ni’Shuilleabhain is competing on the club level at Northwestern only because the school doesn’t have a team.

“It’s a testament to each athlete’s athleticism and their commitment to their sport,” said Ursuline head coach Erin Sullivan-Baca. “We love following their careers in college. It says a lot for our program.”

Thompson won two gold medals at the Route 66 Regatta in Catoosa, Oklahoma, earlier this month. She won the two-person and four-person races. She also was a 2x and 4x finalist at the Texas Rowing Championships in 2016.

“I love Loyola Marymount’s campus, and I love their coach,” Thompson said. “He’s in his first year, and he always wants to see you succeed.” 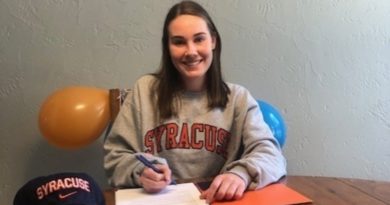 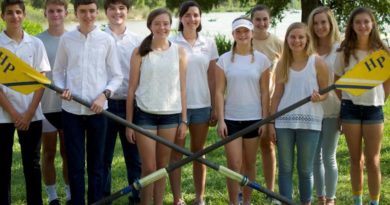