GEORGETOWN — From the onset — as if its undefeated record wasn’t enough validation — it was clear who the better team was between Highland Park and Boerne Champion on Thursday in the Class 5A state semifinals.

It wasn’t until 10 minutes from the end, however, that the Lady Scots could finally stop stressing about the outcome of a game they dominated from beginning to end.

Behind two goals from freshman Presley Echols, the last one in the 70th minute, the Lady Scots beat the Chargers 2-0 and punched their ticket to the state championship game against Aledo, which defeated Leander Rouse in overtime in the other semifinal.

“We’ll need to be better,” Echols said of playing in the title game on Saturday. “We’ll need to finish more chances, but if we put in the effort that we can, we’ll be good.”

The Lady Scots (26-0) were a machine, constantly overwhelming the Chargers (16-9-2) and creating numerous scoring chances.

In the 19th minute, Echols took advantage of one of them, getting past Champion goalkeeper Sarah Schlemmer on a breakaway and sending the ball into the back of the net for a 1-0 HP advantage.

At that moment, and with the way HP had been attacking, it felt like the first of multiple scores to come. Schlemmer would not allow that.

“Their goalkeeper had a fantastic game,” Scots head coach Stewart Brown said. “You saw that with the save from Riley Malone’s header early in the game. She had four, five really good saves and I credit her for having an amazing game.”

Overall, HP had 16 shots on goal, with a pair of them hitting the post. Schlemmer had 14 saves. The Chargers’ offense, however, could not get anything going and had zero shots on goal.

But the 1-0 advantage was still slim. So when Echols found herself alone in front of Schlemmer and put a low shot past her right side late in the game, all but sealing the victory, HP could finally breathe easy. Echols has five goals in the past three games.

“It was a relief to see that second goal go in,” Brown said.

After falling just short last year in Class 6A, the Lady Scots now get a chance to finish the season undefeated and win their first state title since 2012.

“We’ve just got to show up and play and see what happens,” Brown said. “Everybody trusts each other. We have great confidence. We are playing in the final. That’s a huge honor, and it go can any direction from there.” 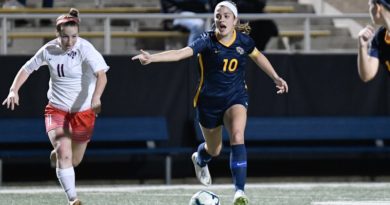