Seven years after winning the school’s first UIL team title, the Jesuit soccer team is headed back to the state tournament.

The Rangers topped Sachse 2-0 on Saturday in the Class 6A Region II final in Austin to earn their first trip back to Georgetown since winning the 5A crown in 2010.

The Rangers capped their run through Region II with a shutout of Sachse, marking the third consecutive clean sheet for Jesuit and the fourth in five postseason games. Meanwhile, the Rangers tallied a pair of first-half goals, including one by Andrew Gilschrist and a penalty kick by Tommy Flaim.

On Friday, Jesuit eliminated Round Rock Stony Point by the same score. Will Kennard and Reilly Minigutti were the goal-scorers — both coming in the second half. Luke Ostrander saved 17 shots in the two games combined as part of a stellar defensive effort by the Rangers throughout the regional tournament.

Juarez-Lincoln held off Edinburg North 1-0 in the Region IV final on Saturday. The Huskies, who will be making their state tournament debut, also have shut out four of their five postseason opponents. 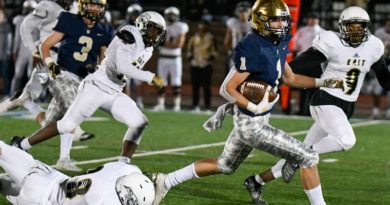