CARROLLTON — Don’t panic. Trust in each other. Stick to the game plan.

That mindset has caused Highland Park to come from behind three times for playoff victories. And the most recent instance has the Lady Scots headed back to the state tournament.

Presley Echols scored a pair of second-half goals as HP rallied past Prosper 2-1 in a battle of unbeatens in the Class 5A Region II final on Saturday at Standridge Stadium.

The Lady Scots (25-0) allowed the opening goal for the third time in five postseason games. And just as it had against Carrollton Creekview and Mansfield Lake Ridge, HP came back with a vengeance.

“It allows us not to panic. Having been in those situations before, we knew we could come back,” said HP head coach Stewart Brown. “The girls did a great job of trusting themselves and playing like we have all season.”

Faced with a 1-0 deficit but playing with a stiff breeze after halftime, the Lady Scots scored the equalizer with 19:05 remaining when Echols, a freshman, headed a cross from Frances Ann Matise into the right corner of the net.

Less than six minutes later, Echols — who also scored twice in the 3-1 win over Lake Ridge in the regional semifinals on Friday — tallied the game-winner on a breakaway after a wind-aided goal kick from Ginny Hoy bounced past the Prosper defense.

Earlier, the Lady Eagles (26-1-1) had the momentum after Kat Rogers fired a shot from 30 yards away into the top center of the net for the game’s first goal.

Meanwhile, HP didn’t have any shots on goal before halftime, but once they changed ends, the Lady Scots became the aggressors.

They set the tone for the comeback in the opening minute of the second half, when Rachel Wasserman’s long free kick was on frame, tipped over the crossbar by Prosper goalkeeper Peyton York. On the ensuing corner kick, a scramble in the box provided another opportunity.

“We wanted [the wind] at our back [in the second half] so we would have some chances and could defense when we had fresh legs,” Brown said.

The Lady Scots will make their third consecutive trip to the state tournament in Georgetown, and their fifth in the past six years. They were the state runner-up in Class 6A a year ago after falling in penalty kicks against Flower Mound.

Echols wasn’t on that team, but most of HP’s juniors and seniors have been to state multiple times. And each of them are still searching for their first title.

“To get there once is phenomenal. To go back for a third time is really special,” Brown said. “We don’t take it for granted. This will be a fun week.” 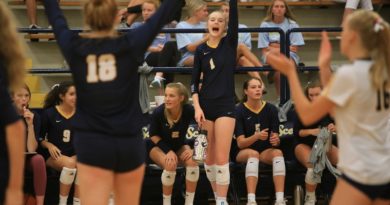