In a game that many projected as a mismatch, Highland Park at least kept things interesting until the end.

The Scots were within striking distance for much of the game against perennial national power Chicago Simeon before falling 71-63 on Saturday in their final tuneup before the start of District 15-5A play.

HP was forced to play from behind all night after the Wolverines (6-0) sprinted to an early 16-3 lead, but the Scots (7-6) cut into the margin on multiple occasions due mostly to a barrage of three-point shooting.

“We were a little nervous at first. We turned it over way too much, but we still battled,” said HP head coach David Piehler. “No one thought we had a chance against these guys, but I’m proud of their effort.”

The Scots trimmed the Simeon lead to five points on a Matthew Lodwick 3-pointer in the second quarter, and again on a Will Enzor trey in the third. Enzor finished with a game-high 21 points.

After some early jitters, HP looked more comfortable in the second half against the more athletic Wolverines, who forced 18 turnovers and blocked almost a dozen shots.

HP connected on nine 3-pointers overall, including five for Enzor and three for Lodwick. The Wolverines made eight treys, but seven of those came before halftime.

In the second half, Simeon relied extensively on the inside-outside combination of Messiah Jones and Evan Gilyard. Jones tallied 14 of his 18 points after halftime, while Gilyard — who is verbally committed to UTEP — had a team-high 19 points and was 9-of-9 from the free-throw line down the stretch.

“It’s great for our team. We get a chance to come out and play a different caliber of basketball and see some stuff we don’t see all the time,” said Simeon head coach Robert Smith. “We came out shooting the ball pretty well and then started taking some bad shots. We’re still a work in progress. I’m still proud of the guys.”

Lodwick added 13 points for the Scots and Nussbaum contributed 10. HP will host West Mesquite in its district opener on Tuesday afternoon.

“It was a great experience for our guys to play against a team like this,” Piehler said. “West Mesquite is who we’ve been focusing on. That’s who we’re gearing toward.”

The game was the nightcap for the National Hoopfest event, which included four games in which local powers such as DeSoto and Lancaster faced squads from Kansas, Illinois, and West Virginia. 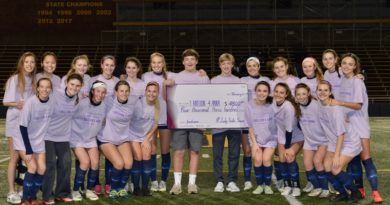 Allen Ties Bevers For Most Wins at HP