Highland Park will carry plenty of momentum and confidence into the start of District 15-5A play this week.

The Lady Scots (8-5) have won four straight games, earning the consolation championship at the Curtis Culwell Invitational tournament last weekend in Garland before an overtime win against Lincoln on Tuesday.

Against the Lady Tigers, who were one win away from reaching the Class 4A state tournament last year, the Lady Scots rallied in the fourth quarter to force overtime before winning it 63-58. Morgan Smith paced HP with 22 points, followed by Eve Loewe with 16 points and Emma Hill with 13.

As for the tournament, HP bounced back following an opening-round loss to Garland Lakeview Centennial by posting victories over North Garland, Garland, and Garland Naaman Forest. The balanced effort included big games from Smith, Hill, Loewe, and Ashley Turner.

HP starts the district schedule on Friday at home against Lovejoy, a team that also has plenty of confidence after winning a tournament in Lufkin last weekend. The Leopards (12-2), led by standout guard Taylor Meixelsperger, have the best nondistrict record of any team in 15-5A.

Overall, it’s a league in which the Lady Scots should benefit from two years of experience at the 6A level, although four of the other seven teams qualified for the 5A playoffs last season — West Mesquite, Royse City, Mesquite Poteet, and Wylie East. 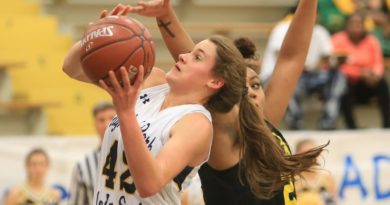