In the mindset of a typical high school senior, many activities rank higher than voting, such as eating, sleeping, watching Netflix, possibly doing homework, or literally anything else. BUT STOP! Let us reevaluate the decision to vote or not to vote.

If you, like me, have registered to vote before October 11, congratulations! You have the option to participate in one of our nation’s most treasured traditions.

We will be the ones to face a world that has been affected by today’s elections, so why wouldn’t we want to voice our opinions? Well, unfortunately, many people of all ages, but especially young people, don’t vote. Just in case you are still debating whether or not to vote, let me clear up a few misconceptions before Election Day arrives.

“My vote doesn’t even count; it’s just another drop of oil in their machine, man.”

Your vote matters! Don’t get sucked into the mindset that your vote will not make a difference. If you fear not being heard, you will only silence yourself further if you do not vote. While elections are not won by a single vote, they are won by an accumulation of votes, and you can be a part of that collective voice. A single voice may not be heard by itself, but as one among thousands it cannot be ignored!

Young people in America have the lowest voting turnout amongst all age groups; 45 percent of people between the ages of 18 to 29 years old turned out for the 2012 presidential election and only 20 percent did so for the 2014 congressional election. In comparison, those 60+ years old had 72 percent and 59 percent turnouts for the 2012 and 2014 elections.

I respect my elders, but why should theirs be the loudest voice in our elections? The youth of this nation will have to live with the consequences of elections much longer than our elders will. So vote! Let the young voice be heard!
“I think I’m just going to vote for whomever my parents will vote.”

You inherited your parents’ hair color, not their political views. Did you know that as an individual you have a unique outlook on the world? No one has experienced life in the same way you have. Therefore, make your own decisions when it comes to the ballot. You should definitely listen to your parents’ political opinions, but that doesn’t mean you need to agree with them. Research the issues on your own. Look into different candidates from different parties. Seek your information from unbiased news outlets or even international ones. Find the facts on which to base your opinions.
“All the presidential candidates are garbage.”

You may be right, but there is more to vote on than just the presidential election. You can vote in crucial national, state, and local elections, too. Always be sure to look up what will be on the ballot before you go to vote. You could be voting for public offices, propositions and/or laws. Local news stations will have good summaries of what you will be voting for, and local elections can be even more important than presidential elections because they will have a larger effect on aspects of your daily life, such as taxes, speed limits, and local infrastructure.

A good citizen is someone who is well informed and active in his or her own community. A part of that responsibility is voting. Be proud of your right to vote. Many incredible Americans have died fighting for this freedom. Do them justice. Do your country justice.

Daniel Heard is a Preston Hollow resident and a senior at Trinity Christian Academy.

Where to Vote in HP 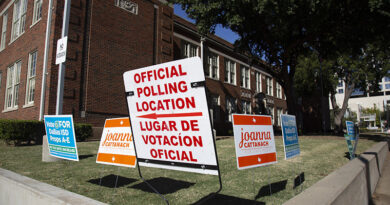 Voters Approve Nuts and Bolts, But Not Luxuries, on Dallas ISD Bond Package