What could have been a night of missed opportunities for Highland Park turned out like so many others have — with a victory.

The Scots overcame four turnovers with a stellar defensive effort to earn a 27-20 win over Lovejoy in the District 15-5A opener on Friday at Highlander Stadium.

Indeed, while the offense sputtered for HP, the defense not only made some big stops, but produced the decisive touchdown on an interception return by Matt Gahm that produced the only points of the second half. O’Neill Sitzer also has a pair of picks, including one that stopped a potential game-tying drive in the final minutes.

“Our guys came up with big plays when they needed to,” said HP head coach Randy Allen. “It was a pretty intense way to end a game. It was a great way to end it.”

While the HP offense didn’t tally any points after halftime, they did dominate time of possession thanks to a balanced mix of rushing and passing. Jack Kozmetsky, in his first game as the featured back this season, led the way with 19 carries for 121 yards and two scores.

The Scots (3-1, 1-0) allowed just 59 total yards after halftime. In the first half, Lovejoy twice gained more than that on a single play — both resulting in touchdown passes from Carson Collins to Chase Van Wagoner.

The game began as an offensive shootout, as Lovejoy led 14-7 with less than three minutes elapsed.

After an opening kickoff return by Lovejoy’s Austin Woods to the HP 35-yard line, the Leopards (1-3, 0-1) were in the end zone just three plays later on a run by Abe Lueck. The Scots responded with a big trick play and a 13-yard score by Kozmetsky.

On the ensuing snap, Collins and Van Wagoner connected for the first time over a fallen HP defender for an 85-yard touchdown.

The Scots settled down after that, and Kozmetsky evened the score again on a 4-yard touchdown plunge early in the second quarter.

The teams traded touchdowns again before halftime, with HP taking a 21-20 lead thanks to a blocked extra point. The Scots claimed that advantage following a 13-yard scoring strike from John Stephen Jones to Scully Jenevein.

The final two-plus quarters, however, saw both teams battling their own miscues. HP lost a fumble (recovered by Mason Mitchell) at the Lovejoy 1, but Sitzer intercepted a pass at the goal line two plays later.

As part of a recurring theme, the Scots couldn’t capitalize, and Lovejoy’s Blake Pfaff picked off a deep pass in the final minute of the first half.

HP took a more deliberate offensive approach after halftime, including a 64-yard drive with 10 consecutive running plays in the third quarter that stalled on downs at the Lovejoy 6.

The Leopards had the best chance to tie the score early in the fourth quarter, following a long interception return by Beau Iovinelli. But Lovejoy turned the ball over on downs when Van Wagoner couldn’t hold on to a ball in the end zone.

“We had opportunities and we didn’t take advantage,” said Lovejoy head coach Todd Ford. “We have a young football team and you learn from these opportunities. We have to continue to grow.”

The Scots’ postgame video breakdown might not be pretty. HP also had a bad punt snap, a touchdown on a kickoff return nullified by a penalty, and a self-inflicted fumble when the Scots were trying to run out the clock in the final quarter.

Yet when time expired, none of it mattered on the scoreboard. What felt like an escape might have been described just as fairly as opportunistic or resilient.

“We made mistakes tonight that we haven’t been making,” Allen said. “We put ourselves in really rough conditions and would make a play to get out of it.”

Besides his interception, Gahm recovered a fumble after a quarterback hit by Luke Blanton.

Jones completed 21 of 33 throws for 247 yards, but didn’t do much in the second half when the focus was on the ground. Cade Saustad caught six passes for 87 yards.

The Scots will aim for their first road win of the season next week at North Forney. 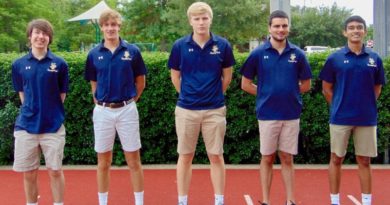 Lady Scots Carry Momentum Into 15-5A