In a neighborhood bordered by Dallas North Tollway and I-35, Maple Avenue Boxing Gym is churning out class after class of fitness enthusiasts, alongside amateur and professional boxers.

Born from the insatiable passion of a former New York Wall Street investment professional, the small gym was never meant to be a cash-cow business venture. Rather, owner Arnie Verbeek wanted it to be a place for boxers to connect with a community and strive for improvement.

Verbeek started the gym on Maple Avenue in 2008 after his wife forbade him from returning to his old gym, where a shooting had occurred. The native Netherlander has been obsessed with American boxing since he first saw it on TV when he was 10 years old. Although he never boxed professionally, his love of the sport has stuck with him.

“I had always used boxing as a fitness routine,” Verbeek said. “But all the Dallas gyms were in these bad places. There were drug deals going on. I thought, ‘there’s got to be a better gym.’”

After failing to find one, Verbeek decided to open his own. Quickly, it became a safe haven for kids and adults looking to stay out of trouble and hone their skills. After losing the original space to high rental rates, the gym moved to its current, smaller location on Butler Street.

“I thought that if I made it smaller, I could have a place to have fitness classes for anyone who wants them in the front, and continue training the kids who have talent in the back,” Verbeek said. “But whatever the case, I wanted to make it a place that doesn’t tolerate violence or drugs.”

The gym’s leadership reflects that same mentality. Brian Lacy, gym manager, was put in charge of overseeing day-to-day operations. The safety of the kids and the gym are in his hands, Verbeek said.

I got to witness Lacy’s leadership first-hand when I signed up for his “Boxing Bootcamp.” I did this with hesitation. I’ve never been one to throw my hat into the arena of athleticism.

Arriving early bodes well for shaking the nerves out, I found. Lacy helped wrap our hands properly and answer any pre-class questions we had.

With each new class he gauges the crowd before deciding how tough the practice should be, he said. We started with some “light” calisthenics of 100 jumping jacks and 100 mountain climbers; I think he and I had different views on “light.”

“This time around, we had a lot more new people in the class,” Lacy said. “So usually, it’s a lot more aggressive than that.”

After the warmup, we went over some basic boxing techniques — straightforward footwork and the classic one-two punch — which we began performing as combinations. This warmup technique, called shadowboxing, was a way to prepare us to spar with punching bags. Pacing ourselves with the interval timer used to signify the start and end of a round of boxing, we began alternating between technique-focused and conditioning-focused boxing with the bags. This meant the difference between perfecting the one-two punch and rapid-fire punching with a set of squats in between.

Gym member Brittaney Harris, who was also in the class, has been attending classes since her introduction to boxing in December.

“The intensity never gets easier, but you start learning all the moves and you definitely notice yourself getting better,” Harris said.

We wrapped up the hour-long workout by using Lacy as our interactive punching bag. I didn’t want to let him down. With him able to see my technique so closely, I made it a priority to give it all I had. And when the class came to a close, I found myself wanting to come back for more.

Get Going at the Ballet Burn 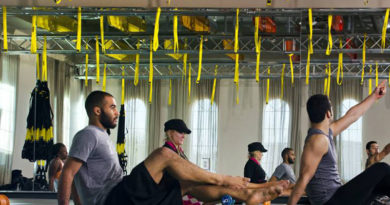