They say when you marry in June, you’re a bride all your life. Maybe that’s why sisters Rachel Omundson and Anna Gilmore (née Slaton) are so busy this season.

The Park Cities natives are growing a fresh floral business in a cozy second-floor workspace above Bandito’s Tex Mex Cantina in Snider Plaza, and as they approach their two-year anniversary, they have found themselves in high demand.

After college, the sisters went in separate directions; Omundson to Chicago, where she started a family, and Gilmore to Birmingham, Ala., where she worked for Southern Living as a stylist. They always talked about starting a business together if they ever came home.

“It was like a jokey dream, the idea that we would do this together,” Gilmore said.

The pair opened Three Branches Floral in 2014, and have since enjoyed watching it flourish. Last fall, after a solid year of investing in the wedding community – bringing people flowers, building relationships with other floral designers, and steadily earning the trust of event planners – Three Branches was flooded with requests.

The 13 years the sisters spent apart in the North and South inform and influence their design sensibilities. Omundson’s Chicago twist is “edgy, modern,” while Birmingham brings “old-school Southern traditional” into the mix, they said.

“As sisters, there’s sometimes a shared vision, but there’s also that added element of Rachel’s eye and my eye,” Gilmore said.

Their two perspectives set them apart in a world of floral design that they see as (sometimes) stale.

And the bridal community has started to notice. Catherine Mathes of mathes & co. events hired Three Branches for an event last fall, and since then they have collaborated on 10 events, with two more upcoming weddings this spring.

Chelsea Caswell, also of mathes & co., even chose Three Branches for her own wedding last April. Caswell wanted someone who had design skills, but also someone she liked and felt comfortable with.

“They both have such fun spirits, and they’re so calming,” she said. “They’re also incredibly creative.”

The girls are modern, traveled, and have a laidback, boho vibe. They are also, in a way, purists, with a commitment to craft and an old-world concept of what a community business should look like.

“You get the best from people who stay true to what they’re good at,” Gilmore said. “When you have a photographer who loves photography, and a cake person who loves cake, and a paper person who is passionate about calligraphy.”

She and Omundson see floral as their place within a community of craftsmen. That’s why they plan to hone their artistry, not branch out into rentals or other areas of the event planning industry, which they feel would dilute the process.

“We’ll always … take a [limited] number of events such that we’re always taking care of, and knowing, our clients,” Omundson said. She and her sister are holding to that model, and settling into their niche, where they’re at home. 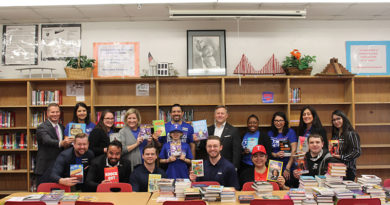