ROUND ROCK — Less than 24 hours after getting drafted by the Atlanta Braves, Jesuit’s Kyle Muller delivered a 2-0 victory on Friday against Houston Langham Creek in a Class 6A state semifinal at Dell Diamond.

The 6-foot-5 senior limited the Lobos to three hits and struck out nine in the shutout, including a called third strike to end the game.

“I don’t think I could have imagined a better three-pitch strikeout to end my high school pitching career,” Muller said.

The Rangers (35-8) will play for their first UIL state title at 11:30 a.m. Saturday against either San Antonio Johnson or Amarillo.

It was another big moment in a big week for Muller.

On Monday, the lefty was named the Gatorade High School Player of the Year and got a surprise visit from the Texas Rangers pitcher Cole Hamels during the presentation. On Thursday, he was drafted in the second round by the Braves with the 44th  overall selection.

“It hasn’t really hit me; it’s been an exciting week for sure,” Muller said. “I’m just trying to take it day-by-day and soak it all in, because you’re never going to get these days back.”

The Rangers gave Muller all the run support he needed in the fourth inning. Bryce Bonner drew a walk. Jared Bond followed with a single through the infield, while designated hitter Will Guzman drove in courtesy runner McCoy Lopez with a single.

Bond advanced to third on the play, and later scored on a sacrifice fly by Matt Horvath.

Jesuit had a runner reach base in each inning, but Langham Creek starter Connor Ferguson limited potential damage in five innings of work.

For the Lobos (30-12), courtesy runner Caleb Schulz was the only runner to make it past second base in the game, and he was stranded after a strikeout in the fifth inning.

One inning later, Zach Sweet led off with a single, but was picked off by Muller. In the seventh inning, Langham Creek drew a lead-off walk, but Muller responded with a pair of strikeouts, including the game-clinching called strike.

“We didn’t get a break; we just needed that one hit,” Langham Creek coach Armando Sedeno said. “Give all the credit to their kid. He did a great job and it just didn’t work out our way.” 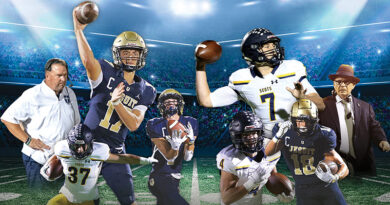 Rangers, Scots Are Rivals in New District 7-6A

Jesuit Heads Back to Regional Semis